I have often been asked by readers where certain events took place or locations of certain buildings and complexes that are not open to visitors and to a greater extent have now been removed and replaced with other facilities.
The Plan I am showing here depicts the period while I was living within in the Camp from 1948-1954. I have made one omission, there was a railway line linking the Fuel Depot from the main trunk which was built by GI Prisoners around 1950/51

Notes:[1] The coal bunker, where the massacre took place, was modernized 1950/51 and is fully automated
[1a]Living Quarters of German Employees
[2] This crematorium was portable and cast iron,gas fired
[3] Alleged burial-site of 20 children,I did not pursue it further
[4] Building was later used by the Ord.Supply Office
[4a]Cells were removed,building used as paint store
[4b]Used by Units of US Army
[5] Alleged shooting of SS men took place and was stopped after 20 children took poison
[6]The old concentration camp barracks
[A][B]Bldgs.3a,2a,used by temporary SS-Guards
were mainly shot at the coal bunker 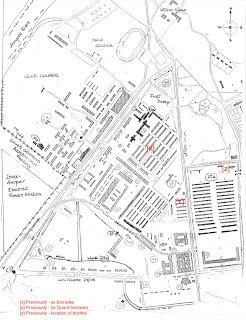 ariel photo taken from the north,
Posted by Dachau KZ at 5:39 PM