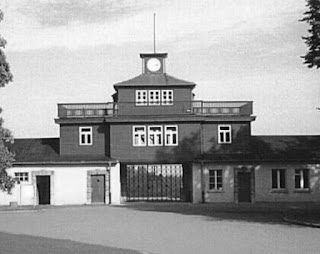 During the War, the Reich Security Main Office (Reichssicherheitshauptamt) could  without formal court hearing perform the death sentence or withhold an execution of the detained person to their discretion without  police or court judgments. This process was called "special treatment"(Sonderbehandlung). The victims were normally taken prisoners on the run or forced laborers who had stolen clothing and food during their flight of ever having a chance of survival. Poles were also often brought in, due to forbidden relationships with German women for "special treatment".
Most of the executions did not take place before the eyes of other  prisoners, but at the shooting range of the German Armaments Works (Deutsche Ausrüstungswerke), at times next to the dog kennels of the commandant's office and usually in the yard or in the morgue of the crematorium. In the basement of the crematorium, there was the same arrangement as in any slaughterhouse, 48 hooks on the wall for the purpose of hanging carcases. During the course of executions, SS commando leader Hermann Helbig said the following later:
"There were two German inmates present. The loop of the rope was put around the neck of the condemned, both of them lifted him up, the rope was was attached to the hook on the wall and then the prisoner was dropped."
Only after 35 to 40 minutes did the doctor arrive to confirm the victim as "Dead". Upon questioning, whether the next in line to be executed would have seen the dead of others hanging before it was their turn, Helbig answered the following: "They were led singly downstairs. They most likely did see others hanging there."

Upon questioning  Helbig stated to have hanged by himself with his own hands about 250 people. Eugen Kogen talks about 1.100 men and women who were murdered in the basement of the crematorium. Only once, in September 1944, the SS hanged a Pole on the parade ground in front of the assembled prisoners. Public executions are mainly known to have occurred at satellite camps such camps as "Dora," Langenstein-Zwieberge and Wernigerode. Hermann Pister said in that regard.:
"Most of the prisoners were led past a hanged man. This was meant to be as an deterrent. For external commands the hanging was done by the appropriate Gestapo office, or a commando from Buchwald went with a portable gallow to the satellite camp to perform the execution".
In autumn 1944, the SS hanged 34 French, Belgian, British and Canadians, they had been part of the Allied intelligence services. One of them was the French engineer and racing driver Robert Benoist. He drove for the automobile brand Bugatti he drove in the mid-thirties and won many races among others the Grand Prix de Picardie and the 24 Hours of Le Mans in 1936 and established six world records. After the war began he was kept as a  French Air Force officer by the Germans, and later escaped from a  POW camp, when he had joined the Resistance. On 10 September 1944, he was strangled in the basement of the crematorium on a wall hook.
There are also witness reports of the execution of Polish officers during 1943. They arrived in two Police Vehicles from the Weimar Train Station and were driven directly to the courtyard of the crematorium. Here they had to line up in one row, they had been wearing uniforms. The Camp Adjutant read out some kind of judgmental writing to them. The hangings took place in his presence. One of the well known victims of execution in Buchenwald was that of the member of parliament and chairman of the KPD, Ernst Thälmann, who on the night of 17th to the 18th August was shot at the entrance of the crematorium ovens (am Zugang zum Ofenraum)


PROMINENT SPECIAL PRISONERS
Isolated  from the actual detainee camp at Buchenwald existed other, smaller areas, which were used for the internment of people. This included the special camp(Sonderlager) at "Fichtenhain" right in the middle of the range within SS settlements, which was built at the turn of 1942/43. The SS registered them, but did not treat the inmates as prisoners of the camp. The first prisoners were Romanians who had fled to Germany of the Legion's "Archangel Michael" (Iron Guard), at  the end of 1942, who lived in the wooden barracks and remained there until to late summer of 1944 as internees. In early January 1943 there were 130 and by March 225 so called "Legionnaires".
In addition to the special camp "Fichtenhain" was also an Isolation-Barrack that was surrounded by a wall. In it was held the former chairman of the SPD of the parliamentary group Dr. Rudolf Breitscheid, and his wife Tony, together with Mafalda of Hesse wife of the Chief Minister of Hesse-Nassau, a daughter of the Italian king.(Pincess Mafalda did in fact have certain privileges, she had a maid Jehovahs Witness, Maria Ruhnau,sic.)  Special camp "Fichtenhain" was located between the SS barracks and the Arms Factory and was completely destroyed during the air raid on Buchenwald on 24 August 1944. Breitscheid  was killed, Princess Mafalda of Hesse died as a result of the inadequate treatment of her injuries, she incurred a high loss of blood prior to the amputation of her left arm.
After reconstruction of the isolation barrack it detained there in late February 1945 as "Sippenhäftlinge"(kin liability) family members involved in the assassination attempt on Hitler's life. Officers, politicians and other relatives and prominent persons unpopular to the regime. The number of these inmates increased to 57 by the end of March 1945. On the 3rd of April they were taken by Bus in a southern direction, as the approaching Allied Forces were as close as 40 km.

Princess Mafalda
After Mafalda's father(King Victor Emmanuel III of Italy) on 25 July 1943 with Benito Mussolini was removed from his office, Hitler sent eight divisions to Italy in order to seize the government. King Victor Emmanuel III. could go with his family in the protection of the Allies. In revenge, Princess Mafalda was in Rome on 22 October 1943  lured under a pretext into the German Embassy and deported from there without further explanation directly to the concentration camp to Buchenwald. She was housed there in a special barrack along with the couple Breitscheid. During a bombing attack by the USAAF on 24 August 1944 she was buried. She survived with severe injuries and burns. Her arm was amputated too late, and she died three days later. On the evening of 27 August, she was buried in grave 262 in Weimar, she was registered in the cemetery register as a"unknown woman"she was ultimately re-buried in Kronberg-Taunus.sic

MEDICAL EXPERIMENTS
Already in the early years of the camp, SS doctors treated prisoners as experimental material for personal and professional advantages. They tried surgical interventions, tested various methods of treatment and let  people suffer, to drive the progression of their studies of diseases to the final stages. The first pharmaceutical company that showed interest in test results in Buchenwald as far back as 1939, were the Behringwerke Marburg/Lahn part of the IG Farben AG conglomerate.
There were at this stage only sporadic contacts, however at the end of 1941, there had been regular collaboration with the SS given the high number of typhus epidemics in the POW camps, the SS offered to test different vaccines on prisoners, after a joint agreement between the SS, IG Farben AG, Army and Government Agencies preparations for it  were made ​​in Buchenwald at the end of 1941/42.
Even after completion of the first attempts in early 1942, the SS established in block 46, a permanent research station, where experiments  until the war ended and almost all epidemic diseases were carried out. The fenced-off  massive barrack with it's frosted glass windows was throughout the camp soon to be known as a place of death. Prisoners, which left alive were usually very sick, lost hair and teeth, or were murdered later to find medical reference material after autopsies for further evaluation of their clients. From 1943, at Buchenwald, the "Department of Typhus Fever and Viral Research," the Hygiene Institute of the Waffen-SS was enlarged in Block 50 into the "Serum Institute".
The house had and provided laboratory test facilities for "guest" physicians of the Wehrmacht, the Waffen-SS and the Robert Koch Institute of Berlin, who took part in the human experiments in block 46. During a typhus therapy trial with drugs like Acridine-Granulant and Rutenol, provided by the Firma Hoechst, out of 39 prisoners 21 of them died. About their condition, the SS-Doctor Erwin Ding took a precise Protocol.[I did not list the lengthy detailed Records that are available if requested sic]

[Born 14.1.1906 in Berlin. Physician. Medical Doctorate, SS Captain, on-site physician at Ravensbriick Concentration Camp. Swore affidavits for the prosecution as well as the defense of Karl Gebhardt, Waldemar Hoven und Helmut Poppendick. Schiedlausky received his medical license on 15.3.1932 and settled down as a general practitioner in August 1934. Before entering the SS, he also had worked part time in the Reich Labor Service. Schiedlausky joined the NSDAP on 1.9.1941 (No. 617,194) and then the SS (No. 213,323). By 1943, he had achieved the rank of SS captain. From 18.12. 1941 until the beginning of August 1943, he was the on-site doctor at Ravensbruück Concentration Camp. Schiedlausky was tried by the British Military Government in the framework of the Ravensbruck Trial, condemned to death, and executed.sic]


A number of prisoners, so called  passages (Passagen) abused by the SS exclusively as living breeding ground for germs. Their blood was used for artificial infection of others. None of them survived. According to the diary section for "Typhus and Virus Research", it was during August 1942 to October 1944 that 35 trials were conducted.Most of the  experiment was performed with typhus, and right to the very end of the camp, experiments with gas gangrene, typhus and typhoid therapeutics and tolerability studies of vaccines against typhoid fever, smallpox, paratyphoid A and B, cholera, diphtheria and yellow fever had been carried out. In addition, SS doctors experimented  with various poisons, tested the durability of canned blood serum and brought  prisoners in with burns to test treatments. With the support of Himmler  Dr.Carl Vaernet during1944 undertook experiments and operations on glands of five imprisoned homosexuals. More than thousand prisoners of the SS were used as guinea pigs, an unknown number of them died of the consequences, the exact figure will never be known.