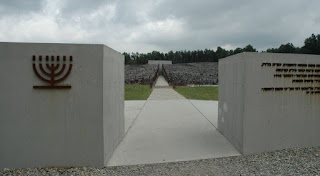 CLOSURE OF THE CAMP
Until mid-December 1942 transports still arrived in Belzec. The exact date of the last arrivals is not known. Probably it was a consignment of about 5,000 people from Rawa Ruska, who was cleared on 11 December 1942. Why the National Socialists stopped the transports to Belzec in December 1942 has never been established. At this time there were still many Jews in ghettos and forced labour camps in the districts of Galiuzien, Krakau and Lublin. From 5 to 7 January 1943, the Lemberg ghetto held at that time appropriately 10,000 Jews who were due for another "Aktion" instead: One part was deported to the Sobibor extermination camp, the others killed in the ghetto. The only rail connection from Lemberg to Sobibor was through Belsec, so that all transports went through the village first. The camp was closed by that date. On the camp grounds, the SS executed Jews who had jumped out of the passing transports. Eustachy Ukrainski, then an inhabitants of Belzec, recalls:.. "After ending the cremations in Belzec of the dead,  transports with naked Jews went through the train-station of Belzec They came from the direction of Rawa Rustka and went to Sobibor. It often happened that some naked Jews jumped from these trains to escape.They were caught, taken to the former camp and buried there after being shot.
A possible reason for the closure of the camp could be that Belzec was intended as a holding centre for transports from Romania. In Sommer1942 the Government of Germany and Romania had negotiated and agreed the deportation of 200,000 Jews from the Altreich, the "Regat" . These should have been  accommodated at Belzec, a precise timetable had been drawn up. However, the Romanian government as from September 1942 did not meet the agreed transportation of Jews.
Another reason for the termination of transports to Belzec was the lack of space for more mass graves in the camp area. Belzec was one of the smallest extermination camps of "Aktion Reinhardt" by area. The whole camp was over seven hectares, the camp zone II with the gas chambers and the burial grounds took a little over four hectares. On this site had also 33 mass graves in late 1942 with hundreds of thousands dead. (104) There was no possible way to increase the camp. In the South it was bounded by the ramp and the railway line. In the West at a distance of 150-200 meters, were the first residential buildings. In the North it bordered on high and steep slopes of the  Kozelsk-Hill. A little more space was to the East, but there was also slopes and swampy forests which made the site unsuitable and furthermore the village of Lubycza Krolewska was not far away. Maybe the contributing and unresolved question of what should happen with the thousand of additional dead bodies, to close at Belzec, was the main reason.
Ref :104-33 mass graves reported by Rudolf Reder, page 68 This has been confirmed by archaeological work in the years 1997-2000, see: Andrzej Kola, Belzec. The Nazi Camp for Jews in the Light of Archaeological Sources.Excavations 1997-1999, Warsaw /Washington, 2000, page 37[this claim is disputed by other writers and historians, see Thomas Kues:  http://www.codoh.com/newrevoices/nrtkreder.html

[Reders Map is claimed to be by most Historians and Researchers inaccurate and in parts outright false, yet it was used as evidence during some trials. From Luftwaffe air photographs of the by then liquidated camp taken in 1944 we are able to make out the approximate dimensions of the camp: it had the shape of an irregular rectangle measuring roughly 250 x 300 meters, with a large part of it apparently still covered by trees during the camp’s period of operation. The courtyard described by Reder is thus almost four times as large as the camp’s entire area! sic.]


NUMBER OF VICTIMS
Since there are no contemporary documents regarding the extermination camp at Belzec, to date, the exact number of victims that died can not be established. Also the identity of some victims' groups can only be discussed as there were a number of different nationalities. The Germans set up the camp, originally and especially for the killing of Jews. There is some evidence that there were non-Jewish Poles,and Roma that have been eliminated. The first estimates of the casualties had been used from the investigation of the Lublin District Commission for the Investigation of German Crimes in the years 1945 and 1946 under the Chairmanship of Judge Eugeniusz Szrojt. He mentioned a figure of about 600,000 people murdered at Belzec, which has been quoted in historical literature for many years. (115) In the 60s and 70s there were two studies on the number of deaths in the camps of "Aktion Reihardt". These studies were based solely on estimates alone. Wolfgang Scheffler calculated as a consultant for the West German criminal process in 1971, the number of deported people to extermination camps of "Aktion Reihardt". He came to the conclusion that 447442 people, mostly Jews from Poland, but also from Germany, Austria and Czechoslovakia, were deported to Belzec. According to his calculation this included around 30710 non-Polish Jews who were mostly in transit ghettos in the Lublin district that perished in  Belzec. (116) In many other ghettos, especially in major cities such as Krakau, Lemberg, Stanislawow Tarnopol, Rzeszow or Lublin, lived large groups of Jewish refugees who were from the German Reich who had fled prior to1939 via Czechoslovakia. Their number can now only be found with difficulty. In and around Stanislawow lived several thousand Hungarian Jews who were expelled in 1941 from the Carpathian-Ukraine,  some of them certainly died in Belzec, we will never know.
Polish researchers also came up in the 70s to the realisation that in Belzec less than 600,000 people had been murdered. In their publications, the number of 500,000 victims appeared (117) in the early 90s, the Polish historian Josef Marszalek published a new estimate on the basis that 141 transports were sent to Belzec with an average of 3425 persons in them. He arrived at a total of 483 000 victims (118)
Fresh impetus for a more precise calculations of the number of victims was the discovery of a decrypted British secret radio message from Hermann Höfle, who reported valid information on January 11, 1943, to Adolf Eichmann in the Jewish Section of the Reich Security Main Office on the transports of Jews during the activities of "Aktion Reinhardt". This document had been preserved in the Public Record Office in Kew, England, and only released in the year 2000. In this (Höfle) indicates that until 31 December 1942 a total of 434 508 Jews were deported to Belzec. (119) The accuracy of the number in this document (including in relation to the camps at Sobibor, Treblinka, and Majdanek) is astonishing. It can be assumed that the Germans had a system were data was  transmitted on the basis of these exact numbers. Maybe there was a web of inter-connecting sections that collated documents or reports from local police departments that reported the number of deportees into each extermination camp.
Little is known about the number of Polish and Roma victims. The first calculations of researcher Eugenisz Szrojt contained the information that about 1,500 Poles had been killed at Belzec,  most of them,  because they had helped persecuted Jews. His calculations are founded solely on the testimony of the rail-road worker Stefan Kisz from Rawa Ruska, who also gave varied statements during several months of investigations between 1945 and 1946 (120) Other witnesses from Belzec were cautious with their statements. They said that there had been individual Poles in the transports, and that few people had been shot in the camp grounds who were very interested in what happens behind the barbed wire. No one tried to estimate the number of victims. (121)
It was rumoured that during the night when no combustion reactions was taking place in the gas chamber, trucks were brought in with Polish prisoners and shot at the camp grounds. (122) This was neither confirmed by the German perpetrators nor the members of the Trawniki guards, who after the war had been convicted in the Soviet Union. (123) One can therefore assume that Poles died in Belzec, but certainly not in numerical large groups.
Even less is known about the Roma. Only a security guard testified that he had witnessed during the first phase of the camp two groups of Roma who had been shot comprising of eight to ten people in the camp by SS Sergeant Kurt Franz and the platoon commander of the Trawniki men Schmidt. (124) The other investigation of 1945 and 1946 showed only a statement of a women resident, who mentioned an arrival of Roma's at Belzec: "In 1942 I went along the road of Rawa Ruska to Belzec and watched as the Germans in two cars with Gypsies in them drove into the camp, they begged on their knees to be released". (125) This source of information is dubious and gives no other indication as to the number of people involved, thus a figure of how many Roma died at Belzec can not be ascertained.