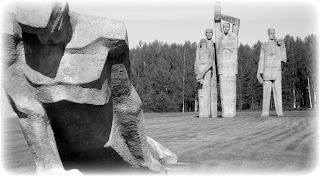 HOW DID THIS ALL START?
It all began on 16 June 1940 and with its occupation the 17 June 1940
with the Soviet Red Army invasion of the Latvia Territory. Latvia’s
terror started at once with the mass arrests, murders or deportations of
its leaders to far regents of the Soviet Union.
First we must journey back to Moscow, Russia and the late hours of 23
August 1939, were all this terror and horror really started with the
signing of The Molotov–Ribbentrop Pact.
The Molotov–Ribbentrop Pact, colloquially named after the Soviet foreign
minister Vyacheslav Molotov and the German foreign minister Joachim von
Ribbentrop, was an agreement officially titled “the Treaty of
Non-Aggression between Germany and the Soviet Union and signed in Moscow
in the late hours of 23 August 1939”. It was a non-aggression pact under
which the Soviet Union and Nazi Germany each pledged to remain neutral
in the event that either nation were attacked by a third party. It
remained in effect until 22 June 1941, when Germany invaded the Soviet
Union.
In addition to stipulations of non-aggression, the treaty included a
secret protocol dividing Northern and Eastern Europe into German and
Soviet spheres of influence, anticipating potential "territorial and
political rearrangements" of these countries. Thereafter, Germany and
the Soviet Union invaded, on 1 and the 17 of September respectively,
their agreed sides of Poland, dividing the country between them. Part of
eastern Finland was annexed by the Soviet Union after the Winter War.
This was followed by Soviet annexations of Estonia, Latvia, Lithuania.

The tiny Baltic States had the misfortune to be located between the
totalitarian regimes of the Soviets and the Nazis. In August and
September 1939, Hitler and Stalin had their countries sign treaties and
secret agreements; by this time, the Baltic States were no longer
republics, but had authoritarian regimes. Hitler, in order to execute
his plans of aggression, [of the Soviet Union, sic] had to pay a price.
In secret agreements he "gave" Stalin not only a part of Poland, but
also a free hand in Bessarabia, Bukovina, Finland and the THREE BALTIC
STATES. In mid-June 1940, when international attention was focused on
the German invasion of France, and after first extracting a Latvian
agreement under duress, Stalin personally threatened the Latvian foreign
minister, in Moscow during negotiations, to the stationing of Soviet
troops on Latvian soil, the Soviet Union invaded Latvia on 16 June
1940.{Stalin may have threatened him but the written Ultimatum was
handed over by Molotov. sic] ( I still remember the speech Dr. Goebles
gave on the "Deutschland Sender" to explain to the German people the
reason of invading Russia. Stalin's demand to occupy the Baltic States
in addition to other counties was the main topic, and had to be stopped,
sic)
Soviet NKVD troops raided border posts in Lithuania, Estonia and Latvia.
State administrations were liquidated and replaced by Soviet cadres, in
which 34,250 Latvians, 75,000 Lithuanians and almost 60,000 Estonians
were deported or murdered. Elections were held with single pro-Soviet
candidates listed for many positions, with resulting peoples assemblies
immediately requested admission into the USSR, which was granted by the
Soviet Union. Latvia, now a puppet government, was headed by Augusts
Kirhenšteins. Latvia was incorporated into the Soviet Union on 5 August
1940 as the “15th Republic of the Soviet Union”. The USSR annexed the
whole of Lithuania, including the Scheschupe area, which was to be given
to Germany. “Lithuania had joined the Soviet Union on 3 August, Estonia
followed on 6 August”. Nevertheless, although it had lost its
sovereignty de facto, Latvia existed de jure, in international law,
since many nations including the United States and Switzerland never
acknowledged its annexation.

Concerns over the possible existence of a secret protocol were first
expressed by the intelligence organisations of the Baltic States scant
days after the pact was signed. Speculation grew stronger when Soviet
negotiators referred to its content during negotiations for military
bases in those countries.
There is an unknown and unpublished fact that the Soviet NKVD before the
Nazi Army invaded the Soviet Union was responsible for handing over to
the Nazi Gestapo, SS and SD tens of thousands of Jews that had fled to
the Soviet Union in the wake of the advancing Nazi Army. This was before
the Nazi Army had invaded the Soviet Union on 22 June 1941. Even the
tens of thousands of Soviet Union Jews were not safe from being turned
over to the Nazi Gestapo to be taken to Concentration Camps or just
outright murdered. As for the exact number of Jews that the Soviet NKVD
had turned over to the Nazi Gestapo is known today for the Soviet Union
has had over 60 years to hide this information. On 16 June 1940, Soviet
Foreign Minister Vyacheslav Molotov presented the Latvian representative
in Moscow an ultimatum to be answered within six hours. Based on
unfounded accusations and accusing Latvia of violations of the pact.

The Soviets demanded that Latvia immediately form a new government and
allow an unlimited number of Soviet troops enter the country. Latvia
could not resist the aggression and conceded. The Red Army occupied
Latvia on 17 June 1940.

Germany terminated the Molotov–Ribbentrop Pact with its invasion of the
Soviet Union at 03:15hrs on Sunday, 22 June 1941 with the Nazi Army
invasion of Latvia with Liepāja targeted by the Germans as a town of
special importance. It was a naval base and also an important
international port. As such, the population was suspected of being more
sympathetic to Communism. The German army planned to capture the city on
the first day of the war, Sunday, 22 June 1941. The attack on Liepāja
was led by the German 291st Infantry Division. Strong resistance by the
Red Army and other Soviet forces prevented the Germans from entering the
city until June 29, 1941, and resistance, including sniper fire,
continued within the city for several days afterwards. The city was
heavily damaged in the fighting and fires burned for days.

With the German Army crossing the Latvian frontier in the early morning
of Sunday, 22 June 1941 and entering the City of Riga Latvia on 1 July
1941 the bloody summer against the Jews began. Nazi sympathisers and
collaborators began their programs of terror, arrests, muggings,
beatings and murder against the Jewish people. Before the German Army
arrived in Riga, there were some 40,000 Jews living in Riga. With the
approach of the Nazi Army and entering Riga, there were only 30,000 Jews
still living in Riga, The rest had evacuated with the retreating Soviet
Army or left the country entirely moving to other countries not under
the occupation of the German Army or Soviet Union. Out of these 30,000
Jews that were still living in the City of Riga Latvia when the Nazi
Army entered Riga only 200 Latvian Jews survived the Nazi terror, horror
and inhuman treatment during their occupation of Latvia and the City of
Riga until the final retreat. [Figures quoted in my mind are somewhat
suspect in my opinion and should be taken with a grain of salt, sic]