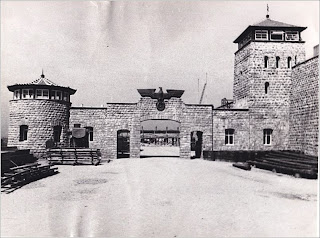 HUMILIATION-ABUSE-TORMENT-DEATH-ALL NATIONALITIES
Spaniards
Spanish prisoners of all ages numbering 4,693 are known to have died in Mauthausen. They had sought refuge in France from the civil war in Spain. Then, following the defeat of France by Germany, they were used as pawns in Hitler's efforts to draw Franco into the war on his side. General Franco did provide as a token Spanish soldiers "The Blue Division" , which fought on the German side on the eastern front, it is also noteworthy to mention that German War Medals were allowed to be worn by their veterans in public sic] For several months discussions between the Auswärtiges Amt (the German Foreign Office) and the high command of the Armed Forces (OKW) as to whether they should be granted prisoner-of-war status. In the end it was refused. Had it been granted, the wives and children would probably have enjoyed some form of freedom. Perhaps it was to prevent this that they were denied such protection.
The round-up of of Spaniards in France had began early as May 1940. Most of them were grouped together and worked in Puttalange, Lorraine. After the German Army had overrun France, all the Spaniards were moved from Puttalange and sent to Mauthausen, where they arrived on 25th November 1940. They were immediately despatched to work in the quarry. Some workers were drawn from this transport to work in Mauthausen's political section, others were chosen to be prisoner functionaries. [A distinction has to be made here, between civilian refugees and prisoners taken during the Spanish Civil War 1936-1939 who came firstly to Dachau and later to Buchenwald and other camps like Mauthausen, they were mainly German and Austrian Nationals, which were termed as "Rot-Spanien-Kämpfer", part of the Red Brigade. The Civil War broke out with a military uprising in Morocco on July 17, triggered by events in Madrid. Within days, Spain was divided in two: a "Republican" or "Loyalist". Spain consisting of the Second Spanish Republic (which were pockets of revolutionary anarchism (Trotskyism) and a "Nationalist" Spain under the insurgent generals, and, eventually, under the leadership of General Francisco Franco. By the summer, important tendencies of the war become clear, both in terms of atrocities on both sides and in the contrast between the Soviet Union's intermittent help to the Republican government and the committed support of Fascist Italy and Germany for the Nationalists, sic].
One Spaniard, a Catalan who worked in the political section, was Casimir Climent, now resident in Paris. He copied and preserved material which is of incalculable value for any historical study. When orders arrived for the destruction of the records in this section, he managed to hide no less than fourteen kilos (nearly 31 lbs) of prisoners' files behind a cabinet which concealed a former window in the wall.

From the records of these early days at Mauthausen, it appears that the Spanish prisoners were among those with the highest survival rate. They were numerically small in comparison with other nationalities, but many of them were reasonable cultured and well educated and thus enabled them to get better, less physical strenuous, jobs in the camp. As front after front fell in 1941 and huge transports of prisoners began to arrive, these Spaniards became invaluable to the SS. Those who were good at, say, book-keeping or languages became efficient members of the prisoner staff. Thus they escaped the worst of the suffering endured by their less qualified compatriots. Those who reached such positions did their best to help the less fortunate Spaniards. When newly arrived transports were awaiting the preliminary showering, the Spanish prominenten would seek out any new fellow countrymen. With luck such men might be given as much as a whole loaf of bread. The greatest loss of Spanish lives occurred during the early months of the building of the camp. The main road to the front entrance was built by Spaniards at tremendous human cost. It was made of huge granite slabs, laid in cobble form, and was wide enough for three vehicles to be driven abreast.
Czechs
The first transport of Czech prisoners arrived in October, 1941. They were divided into two groups, one for work in the quarry and one to build the camp for Russian prisoners. The site chosen for the 'Russenlager' was outside and to the west of the camp's confines. Here they dug foundations, levelled the ground and prepared the stone blocks for the building. The Czechs were housed in the camp proper, mainly in Blocks 10 and 13, while the sick were put in Block 16. There were few Czech Jews in Mauthausen because most of them were sent to the camp of Theresianstadt, north of Prag. [Unlike other Holocaust camps, Jews entered Theresianstadt willingly, even eagerly, because Nazi lies led them to believe it would be a peaceful retreat. The deception continued even after it was clear that Theresienstadt was a ghetto. The Nazis used the camp to film a pro-concentration camp propaganda film and fool Red Cross officials into believing the Jews were being well cared for. sic] Many Czechs were murdered as a direct acct of revenge after the shooting in Prague in 1942 of Himmlers Deputy, Reinhard Heydrich. Whole commands of Czech prisoners working on road building were machine-gunned and left by the way side until lorries were sent to take the bodies to the crematorium.
Dutch Jews
The mass deportation and elimination of Dutch Jews was on a immense scale, second only to that of Polish Jews. Early 1941, The Dutch people organised a general strike against the occupation authorities under Seyss-Inquart. In February, as a direct result of this, 389 Jews from Amsterdam and Rotterdam were sent to Buchenwald. Here many of them fell ill because of the severe climate and harsh conditions, but they were barred from the infirmary by the chief SS Dr Eysele (who escaped to Egypt after the war). Those who had been admitted before the ban were either given fatal injections or discharged. The remaining 340 were transported to Mauthausen. The following account of what happened to the Dutch Jews when they arrived there is given by two political prisoners, who were later transferred from Mauthausen to Buchenwald. One was a Pole, the other German.
"The shipment from Buchenwald arrived around midnight. In the morning the inmates of Mauthausen were not allowed to leave their barracks. Fifty of the newly-arrived Jews were chased from the bath-house naked and driven into the electrical fencing. All the others were herded into a barrack in which a German politcal prisoner from Bavaria was the 'clerk'. This latter was informed to 'supervise the decimation of Jews within six weeks'.

He refused, was given twenty-five lashes on the wooden horse and transferred to the 'sock-mending detail', a favourite source for injection liquidations. The second day of their arrival, the Jews were shunted into the quarry. They were not allowed to use the steps to the bottom of the pit: they had to slide down the loose stones at the side and even here many died or were severely injured. The survives then had to shoulder hods, and two prisoners were compelled to load each Jew with an excessive heavy rock. The Jews had to run up the steps. In some instances the rocks immediately rolled downhill, crushing the feet of those behind. Many of the Jews were driven to despair the very first day and committed suicide by jumping into the pit. On the third day the SS opened the so-called 'Death Gate' and with a fearful barrage of blows drove the Jews across the guard line, the guards on the watchtowers shooting them down in heaps with their machine-guns. The next day the Jews no longer jumped into the pit individually. They joined hands and one man would pull nine or twelve of his comrades over the lip with him into a gruesome death. The barrack was cleared of Jews not in six, but barely three weeks. Every one of them perished by suicide or by shooting, beating and other forms of torture'. [PS 2176 (6), JAD, 3rd US Army, sic]

With the US Army closing in from the West, and the Soviet Army from the East, on the morning of 3 May 1945 Ziereis departed KL Mauthausen with his wife and three children. He was identified by former Polish inmates, and arrested on 23 May 1945 at his hunting lodge on the Pyhrn in Upper Austria. While trying to escape the Americans he was shot at and wounded at about 18:00 hrs (6 pm). He was shot once through the upper left arm, and suffered a mortal gunshot wound in the back and into a lung and through the stomach exiting the other side. Ziereis was given first aid, then transported to the US Army 131st Evac Hospital in Gusen, arriving there at 21:30 Hrs (9:30 pm). There Ziereis was questioned over six to eight hours that night with Colonel Richard R. Seibel of the 11th Armored Division then commanding Mauthausen, other US Army personnel and civilians. His statement was taken. He was one of about 2,893 patients being cared for there, but died shortly afterwards at 07:30 Hrs (7:30 am) on 24 May of his wounds. It seems that during th night of 23/4 May, a group of ex-Mauthausen prisoners told US soldiers in the Spital area that they had seen Ziereis. They were able to lead the soldiers to the place near a wood and identify him. Ziereis was obviously extremely frightened when he saw them and opened fire, he had retrieved his pistol which was hidden under a tree, [according to Austrian sources, sic] The Americans replied, and he was wounded , first in the upper arm and then again, as he twisted round, in the back.