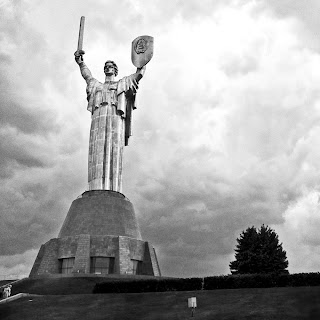 In the afternoon Hitler, having determined to smash another country (Yugoslavia), worked on the Japanese Foreign Minister. "England has already lost the war," he began. "it is only a matter of having the intelligence to admit it." Still, the British were grasping at two straws: Russia and America. Toward the Soviet Union Hitler was more circumspect than Ribbentrop had been. He did not believe, he said, that the danger of a war with Russia would arise. After all Germany had some 160to 170 Divisions "for defence against Russia." As to the United States:
America was confronted by three possibilities:she could arm herself, she could assist England she could wage war on another front. If she helped England she could not arm herself. If she abandoned England the latter would be destroyed and America would then find herself fighting the powers of the Three-Power Pact alone. In no case , could America wage war on another front. Therefore, the Führer concluded, "never in human imagination" could there be a better opportunity for the Japanese to strike in the Pacific than now. "Such moment," he said, laying it on thickly as he could, "would never return. It was unique in history." Matsuoka agreed, but reminded Hitler that unfortunately he "did not control Japan. At the moment he could make no pledge on behalf of the Japanese Empire that it would take action." But Hitler, being absolute dictator , could make a pledge and he made it to Japan, quite casually and without being asked to, on April 4, after Matsuoka had returned to Berlin from seeing Mussolini. This second meeting took place on the eve of the Nazi attack on two more innocent countries, Yugoslavia and Greece, and the Führer, thirsting for further easy conquests and for revenge on Belgrade, was in one of his warlike moods. While he considered war with the United States "undesirable", he said, he had "already included it in his calculations." But he did not think much of America's military power. [Hitler had come to believe his own Nazi propaganda, sic]
Germany had made her preparations so that no American could land in Europe. Germany would wage a vigorous war against America with U-boats and the Luftwaffe, and with her greater experience...would be more than a match for America, entirely apart from the fact that German soldiers were, obviously, far superior to the Americans. This boast led him to make the fateful pledge. Schmidt recorded it in his minutes: "if Japan got into conflict with the Unites States, Germany on her part would take the necessary steps at once.' From Schmidt's notes it is evident that Matsuoka did not quite grasp the significance of what the Führer was promising, so Hitler said it again: 'Germany, as he had said, would promptly take part in case of a conflict between Japan and America.'

DECEITFUL POLITICAL MANOEUVRING
Hitler paid dearly not only for this assurance, so causally given, but for his deceit in not telling the Japanese about his intention to attack Russia as soon as the Balkans were occupied. Somewhat coyly Matsuoka had asked Ribbentrop during a talk on March 28 whether on his return trip he "should remain in Moscow in order to negotiate with the Russians on the Non-aggression Pact or the Treaty of Neutrality." [In fact he did not inform Ribbentrop either that he would sign the Neutrality Pact in Moscow, sic]. The dull-witted Nazi Foreign Minister replied smugly that Matsuoka "if possible should not bring up the question in Moscow since it probably would not altogether fit into he framework of the present situation." He did not quite grasp the significance of what was up. But by the next day it had penetrated his wooden mind and he began the conversation that day by referring to it. First of all he threw in, as casually as Hitler would do on April 4, a German guarantee that if Russia attacked Japan "Germany would strike immediately." He wanted to give this assurance, he said, " so that Japan  could push southward toward Singapore without fear of any complications with Russia." When Matsuoka finally admitted that while in Moscow on his way to Berlin he himself had proposed a non-aggression pact with the Soviet Union and hinted that the Russians were favourably inclined toward it, Ribbentrop's mind again became somewhat of a blank. He merely advised that Matsuoka to handle the problem in a "superficial way." But as soon as the Nipponese Foreign Minister was back in Moscow on his trip home, he signed a treaty of neutrality with Stalin which, as Ambassador von der Schulenburg, who foresaw the consequences, wired Berlin, provided for each country to remain neutral in case the other got involved in the war. This was one treaty, it was signed on April 13, which Japan honoured to the very last despite subsequent German exhortations that she disregard it. For before the summer 1941 was out the Nazis would be begging the Japanese to attack not Singapore or Manila but Vladivostok!

At first however, Hitler did not grasp the significance of the Russo- Japanese Neutrality Pact. In April 20 he told Admiral Raeder, who inquired about it, that it had been "made with Germany's acquiescence" and that he welcomed it "because Japan is now restrained from taking action against Vladivostok and should be induced to attack Singapore instead. At this stage Hitler was confident Germany could destroy Russia during the summer. He did not want Japan to share in this mighty feat any more than he had desired that Italy should share in the conquest of France.  And he was absolutely confident that Japanese help would not be needed. Ribbentrop, echoing his master's thoughts, had told Matsuoka on March 29 that if Russia forced Germany "to strike" he would "consider it proper if the Japanese Army were prevented from attacking Russia." But the views of Hitler and Ribbentrop on this matter changed very suddenly and quite drastically scarcely three months later. Six days after the German armies were flung into Russia, on June 28, 1941, Ribbentrop was cabling the German ambassador in Tokyo, General Eugen Ott, to do everything he could get the Japanese to promptly attack Soviet Russia and also to argue that this was the best way of keeping America neutral. It maybe expected (Ribbentrop explained) that the rapid defeat of Soviet Russia, especially should Japan take action in the East, will prove the best argument to convince the United States of the utter futility of entering the war on the side of a Great Britain entirely isolated and confronted by the most powerful alliance in he world.
Matusoka was in favour of immediately turning on Russia, but his views were not accepted by the government in Tokyo, whose attitude seemed to be that if the Germans were rapidly defeating the Russians, as they claimed, they needed no help from the Japanese. However, Tokyo, was not so sure about a lightning German victory and this was the real reason for its stand.But Ribbent5rop persisted. On July 10, when the German offensive in Russia was really beginning, to roll and even Halder, as we have seen, thought that victory already had been won, the Nazi Foreign Minister got off from his special train on the Eastern front, a new and stronger cable was sent to his ambassador in Tokyo.[Ribbentrop kept trying all that fall and several times during the next two years to induce  the Japanese to fall upon Russia from the rear, but each time the Tokyo government replied politely, "so sorry, please."sic] 'Since Russia, as reported by he Japanese ambassador in Moscow, is in effect close to collapse... its simply impossible that Japan does not solve the matter of Vladivostok and the Siberian area, as soon as her military preparation are completed...I ask you to employ all available means in further insisting upon Japan's entry into the war against Russia the soonest possible date... The sooner this entry is effected, the better it is. The natural objective still remains that we and Japan join hands on the T rans-Siberian railroad before winter starts.
Such giddy prospects did not turn the head of even the militaristic Japanese government. Four days later ambassador Ott replied that he was doing his best to persuade the Japanese to attack Russia as soon as possible, that Matsuoka was all for it, but he, Ott, had to fight against "great obstacles" in the Tokyo cabinet. As a matter of fact the fire-eating Matsuoka was soon forced out of the cabinet. With his departure, Germany lost, for the time being, its best friend, and though closer relations were later restored between Berlin and Tokyo they never became close enough to convince the Japanese of the wisdom of helping Germany in the war against Russia. Once more Hitler had been bested at his own game by a wily ally.
[The Japanese archives reveal how Tokyo evaded Germany on this embarrassing question. When, for instance, on August 19, Ambassador Ott asked the Japanese Vice-Minister of Foreign Affairs about Japanese intervention against Russia, the latter replied. "For Japan to do a thing like attacking Russia would be a very serious question and would require profound reflection." When on August 30, Ott, who by now was a very irritated ambassador, asked Foreign Minister Admiral Toyoda, "Is there any possibility that Japan may participate in the Russo-German war?' Toyodo replied, 'Japan's preparations are now making headway, and it will take more time for their completion."sic]
continued under Part 4