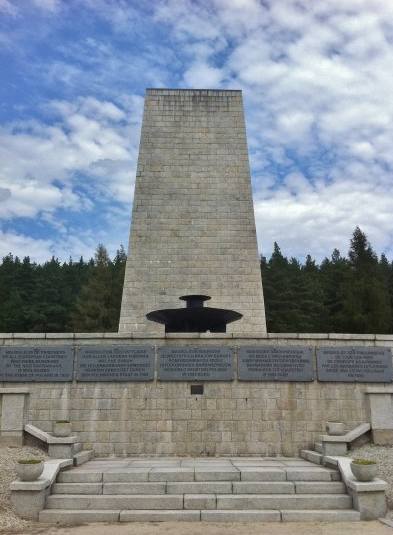 THE CONSTRUCTION OF THE CAMP

After the establishment for the expansion of the concentration camp for an additional 3,000 prisoners until May 1942, from August 1941 until October 1941 there should should have been two additional barracks built to accommodate at least 1,200 additional prisoners. This plan could not be carried out, it was delayed by a transport of Soviet POW's into the camp, which at times had a catastrophic overcrowding as a result. In July 1942, the camp had only  1.890 prisoners, of whom 387 worked to erect barracks (Barackenbau), 69 in road construction, 60 expanding the sewage and drainage facilities, and about 700 worked in the quarry. 400 were partially unfit for work ('schonungsbedürftigt') or reported as hospitalized.
The plan for the gradual expansion of the camp foresaw a prison camp with ten barracks holding 200 prisoners each, moreover to be built were two isolation buildings, three workshops, a cell block, a crematory, a kitchen, a barrack for the laundry and bathroom, a storage shed, an office reception/admission barrack, an effect room and two barracks as hospital stations. For the SS, a garage, commercial buildings, the Kommandantur, a military exercise area and a sports field as well as barracks to accommodate the various (civilian) companies that had been planned ... The execution of these plans, however, were apparently repeatedly delayed and far-reaching changes towards the end accompanied by much-needed hasty extensions had to be provided, yet by 1944 a total of 21 prisoner barracks and four hospital enclosure areas as well as various administration blocks were completed in the camp. In October 1942, the first electrified barbed wire fence outside the camp and the eleven watchtowers were installed. For the planned development work since its beginning, and then repeatedly interrupted, more than one quarter of the inmates who took part in its construction, had to live for a long time in totally inadequate temporary accommodation. About 50-60 civilian workers, specialized in their respective field of trade to comply with local by-laws took part in the overall endeavour.

The camp Gross-Rosen with a total of 722 prisoners in May 1941 was guarded by about 40-50 members of the Kammandantur Staff and the strength of two companies of the SS-Totenkopf-Sturmbann, commanded by First Lieutenant Wilhelm Stötzler and Peter Brandenburg . Almost a year later, the Command Staff counted 73 and two Sturmbanne included together with 196 members of the Waffen-SS. In both groups there was an ongoing fluctuation, and especially the guards were constantly expanding. The new guards came mainly after their training from the SS-Totenkopf guard battalion in Sachsenhausen and from the local recruiting regiment, then members of the Standard (allgeneine) SS and finally even soldiers of the Wehrmacht complemented the contingents. In November 1944, Gross-Rosen had 2,430 guards and for the women-camp 813 female guards (Aufseherinnen), and on 15 January 1945, there were finally 3,222 SS men for about 52,000 male and 906 female guards (Aufseherinnen) for almost 26,000 women prisoners.
The command staff was divided in 1941 in the departments of Adjutant, Political Department, the Protective Custody Camp as the most important and powerful, the Administration, Sanitary Engineering and a Department of Political Training (Politische Weltanschauung) for the SS.
[SS-Sturmbann ("SS-Storm Unit"): The Sturmbann commands were battalion formations within a Standarte, usually three or four in number. These units were commanded by either a Sturmbannführer or Obersturmbannführer. sic]