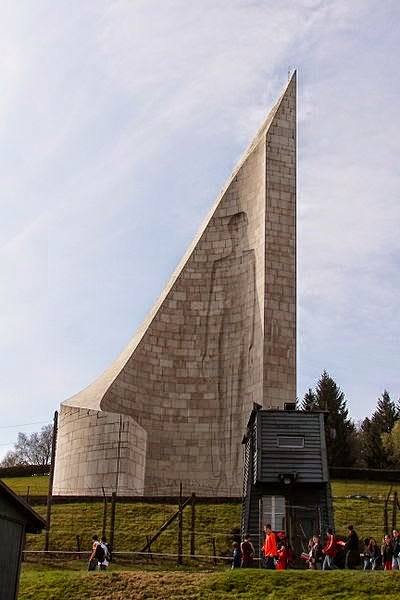 Since the commander was afraid of being attacked from the outside , the administration had a ditch dug outside along the barbed wire fence, and built machine gun positions which were directed to fire into the interior of the camp. The prisoners were fully aware of the advance of the Allies and pretty well informed of what was going on through a radio that was smuggled into the camp, which had the result that tension between guards and inmates rose considerably . At the same time, the Gestapo in Straßburg conducted with the help of the police and the armed forces a major operation against the Maquis du Donon resistance group.  The operation was  coordinated from the village of Schirmeck. Two German Units scoured the area in the direction of the pass of Schiermeck and that of Hantz and brought members of one group into the camp into a secure detention area . The results can be summarized that members of the resistance group Alliance were brought to Natzweiler and executed there on the night of the 1st to 2nd September 1944.
General Delestraint
Delestraint retired in 1939 but was recalled to service after the outbreak of World War II. During the Battle of France, on 3 June 1940, he led the armoured counter-attack against Germans in Abbeville.
After the surrender of France on 25 June, he retired to Bourg-en-Bresse where Henri Frenay recruited him for the French Resistance. Delestraint began to organize resistance cells in Lyon. He clandestinely visited Charles de Gaulle in London and agreed to lead the Armée Secrète. He returned to France on 24 March 1943. However, he was betrayed by the informant René Hardy, and was arrested by the Gestapo on 9th of June, interrogated by Klaus Barbie. He was taken as special prisoner (Nacht und Nebel) to Natzweiler-Struthof and then to the Dachau concentration camp, where he was executed on 19th April 1945, only a few days before the camp was liberated and the war ended.

The Maquis Resistance Organisation
During the Allied invasion of Normandy, the Maquis and other groups played some role in delaying the German mobilization. The French Resistance (FFI Forces Françaises de l'Interieur for "French Forces of the Interior") blew up rail road tracks and repeatedly attacked German Army equipment and garrison trains on their way to the Atlantic coast. Thanks to coded messages transmitted over the BBC radio, each Maquis group was alerted of the impending D-Day by listening for seemingly meaningless messages such as "the crow will sing three times in the morning" or any other pre-arranged messages read in a continuous flow over the British airwaves. As Allied troops advanced, the French Resistance rose against the Nazi occupation forces and their garrisons en masse. For example, Nancy Wake's group of 7,000 maquisards was involved in a pitched battle with 22,000 Germans on June 20, 1944. Some Maquis groups took no prisoners so some German soldiers preferred to surrender to Allied soldiers instead of facing maquisards.
The Allied offensive was slowed and the Germans were able to counter-attack in south-east of France. On the Vercors plateau, a Maquis group fought about 8,000 soldiers under General Karl Pflaum, a defector Generalleutenant of the Third Reich and was defeated with 600 casualties during the Battle of Vercors Plateau. When General De Gaulle dismissed the resistance organizations after the liberation of Paris, many maquisards returned to their homes. Many also joined the new French army to continue the fight.

THE END OF THE KZ NATZWEILER
On the 23rd November 1944 entered the first American soldiers of the 6th Army the vacated camp in Alsace. But the history of the camp went on, by still administrating and maintaining of its satellite camps . Until April 1945, the number of satellite camps and the prisoners rose . This was largely the result due to evacuation of Jewish prisoners from the north and easterly located concentration camps. Upon their arrival, they had the experience of a death march behind them. The men were mainly taken into the "desert camps" [means horrible condition, created due to the extraction of oil from shale deposits]  thus= (Wüstenlager) Bisingen and Echterdingen or Hessental , while the women were placed into the shortly before September 1944 completed women's sub-camps of Calw, Geisenheim , Walldorf and Geislingen. Of the total 52,000 prisoners who passed through Natzweiler , 20% were Jews - men and women.
The death rate reached at this time its high point, with 10 % per month . The satellite camp Vaihingen became a deathbed . The death rate for some arrivals of these marches exceeded 80%.
In total 19,000 - 20,000 prisoners of the concentration camp Natzweiler had died, this would mean that 40% of all  internees were no longer alive at the end of the war. Furthermore In the months after the evacuation of the main camp , the average survival rate of new arrivals did not last longer than three months.