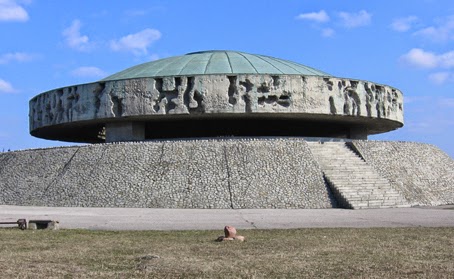 The monitoring apparatus, which was made up of so-called Functionary Prisoners departed from multiple points of the system used in other concentration camps. The power of the Camp Elders did not include all of the detainees, but was limited to an inmate field only. Also, the function of a Camp Youngster was introduced, which was carried out by a Jewish boy named Bubi, who enjoyed as a favourite of the German Kapos privileges not extended towards his fellow prisoners. In the women's field there was a Prisoner's Camp Police. Their task was to maintain order during roll calls, but they were also used in the making of selections. After the arrival of several thousand women from the Warsaw Ghetto in May 1943 in addition to them,  Block Helpers had to be organized. These women would ensure that discipline was maintained in the barracks,  which often housed 1,000  females at that time due to overcrowding.
If we want to look at the set up the system of control, we can distinguish three groups of function prisoners in Majdanek. The first group was the German nationals who had been transferred from camps in the Reich. A few dozen of them belonged to the oldest inmates of Majdanek. The second group consisted of Jews , mainly Slovaks , who had been admitted with the first Transports in the spring of 1942 into the camp. The third group was mixed, but was dominated by Poles , who had been transferred from other camps or the Gestapo prisons to Majdanek . Among the prisoner functionaries of German origin,  the "Temporary prevention prisoners
(BV) predominated numerically in this category.  Many used their power entrusted to them ruthlessly , they not only abused their fellow prisoners , but also arbitrarily murdered them. They often performed corporal punishment or carried out death sentence by hanging. One of the worst torturers in Majdanek included Peter Bürzer , Karl Galka , Fritz Illert , August Schmuck and Peter Wyderka . See:[Function prisoners in the concentration camp Majdanek , in: Zeszyty Majdanka 21 (2001 ), page 29 70.sic ] There was hardly a measure of the SS so perfidious as its attempt to delegate the implementation of terror and violence to the victims.
The concentration camp system owed its stability in no small way was a cadre of kapos, who took over the daily operations of the camp, relieving the SS personnel. Thus, absolute power was ubiquitous. Without the delegation of power, the system of discipline and supervision would have promptly disintegrated. The rivalry over supervisory, administrative and warehouse functionary jobs was, for the SS, just a welcome opportunity to pit groups of prisoners against each other and keep them dependent. The normal prisoner, however, was at the mercy of a dual authority, the SS, who often hardly seemed to be at the camp, and the prisoner functionaries, who were always there. The Israeli Nazi Collaborators (Punishment) Law of 1950, most famously used to prosecute Adolf Eichmann in 1961 and Ivan Demjanjuk in 1986, was originally introduced with the principal purpose of prosecuting Jewish collaborators with the Nazis. Between 1951 and 1964, approximately 40 trials were held, mostly of people alleged to have been kapos. Fifteen are known to have resulted in convictions, but only sketchy details are available since the records were sealed in 1995 for a period of 70 years from the trial date. One person was convicted of crimes against humanity, which carried a mandatory death penalty, but the sentence was commuted to imprisonment. A small number of kapos were prosecuted in East and West Germany. In a well-publicised 1968 case, two Auschwitz kapos were put on trial in Frankfurt. They were indicted for 189 murders and multiple assaults, found guilty of several murders, and sentenced to life imprisonment.
In the first Stutthof Trial, all took place in Poland during the late 1940s, at least four kapos were sentenced to death and all four were executed.

CONTINUED UNDER PART 4
Posted by Dachau KZ at 10:32 PM