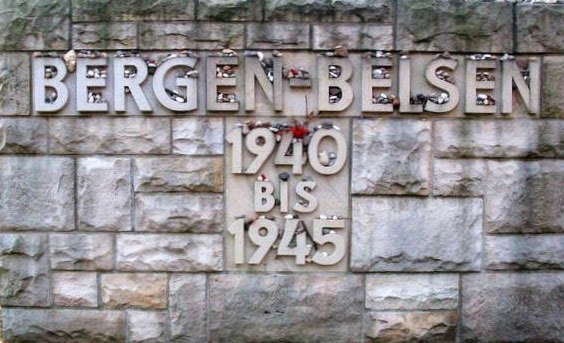 THE EVACUATION TRANSPORTS
On December 2, 1944 , the previous commander , Adolf Haas, was replaced by SS -Hauptsturmführer (Captain) Josef Kramer, who had last been commandant of Auschwitz-Birkenau , where he was responsible for the extermination of several hundred thousand Hungarian Jews . This change in the command structure also marked the completion and final conversion of Bergen-Belsen into a typical concentration camp. The special conditions for the "Exchange Jews" existed now only on paper. Non-Jewish Kapos from the prison camp were given the control over the Star Camp , which often led to ill-treatment of Jewish Exchange Prisoner by these Kapos , including with their responsibilities and subordinated to them were also the work details(Arbeitskommandos). The former Camp Elder of the prison camp was appointed Camp Elder of the total camp (an ominous sign).
With the gradual removal and evacuation of female prisoners from Auschwitz-Birkenau, as the oncoming fighting front was near the concentration camp, which took place since the end of 1944, with a huge amount of dramatic consequences for the concentration camp at Bergen-Belsen , which by its relatively central location in the German Reich , was far removed from the oncoming Red Army , and considered as a prime target to shift  these evacuation transports , although it [the camp] was completely unprepared nor suitable to absorb such an influx of multiple tens of thousands of prisoners in any way.
When Joseph Kramer on December 2 , 1944, took command , there lived 15.257 prisoners here . With the increasing number of evacuation transports , which were directed [in part re-directed] to Bergen-Belsen , the number of prisoners increased dramatically, despite the rising death rate: On 1 January 1945, the prison population was 18.465 , on 15 January it stood at 22.286 and on March 1, it had already reached 41.520 . In February 1945 came, in just the three months from December 1944 , in this context 40,000 to 50,000 prisoners to Bergen-Belsen. 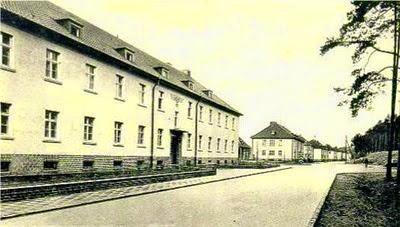 The growing political power of the Bergen-Belsen Jewish DPs was consolidated further when between September 25th and 27th 1945, Josef Rosensaft chaired the first Jewish Conference of the British Zone in Bergen-Belsen. There were many important Jewish leaders in attendance not to mention the presence of the world's press, who were also covering the first major war crimes trial, that of Josef Kramer the former Camp Commandant and the guards of the Belsen concentration camp in Lüneburg. This all served to highlight the DPs fight for political rights and ultimately the right to emigrate to Palestine.
There became established among the Jewish DPs many different political parties from all spectrums of the political rainbow. There were General Zionists, Revisionists, Hashomer Hatzair, Mapai, Mizrachi, and Poale Zion. However, whether they were left wing, right wing or centre parties they all had the same political goal, the emigration to Palestine. The members of these parties would train the younger DPs for that life in Palestine, by forming collectives.
Not only was there a political awakening amongst the Jewish population but also a spiritual one. The committee under Dr Zvi Helfgott-Azaria as Head of the Camp Rabbinate organised the religious aspects of camp life. Polish and Hungarian rabbis, religious writers and teachers would serve the whole camp. Religion would also become an important influence in Bergen-Belsen amongst all Jews not only those of the orthodox persuasion. During religious days the streets of the camp would be totally deserted as people attended prayers. Weddings took place and were carried out in accordance with Jewish law, as were other religious ceremonies. Bergen-Belsen also became a centre of spiritual guidance for those remaining German Jews in the towns and cities of the British Occupied Zone, where there were no rabbis to carry out religious ceremonies or synagogues in which to worship.
With the Jewish Police station located in block GB5, public order within the camp was maintained without the presence of outside police or troops. The only major disorder found in the camp was the violation of the rationing laws and other administration regulations. The activities of these black marketers could be found on the square adjacent to block MB42, where a very active barter trade sprang up. Foreign currencies, cigarettes and other hard to find items were traded. A lot of the merchandise traded came from the occupation forces, whose own members were not averse to dealing in such illegal transactions.
The education of the young became of prime importance and soon after liberation schools were being established in Bergen-Belsen. There were a variety of educational establishments such as the Jacob Edelstein primary school, the Jewish Brigade secondary school, the Trade School, the People's University, a library and evening classes for languages.
The first Jewish newspaper was published at Bergen-Belsen in extreme difficulties. With no printing materials to begin with, the content was handwritten, until paper and printing equipment could be found. Finally a duplicator was obtained and the very first Jewish newspaper titled Unzer Sztyme (Our Voice) of the British Occupied Zone was printed and distributed in Bergen-Belsen. Following on from this success, the Jewish DPs press went on to print newspapers and magazines in Yiddish, Hebrew, German and English.
The cultural side to life was the responsibility of the Central Committee's Cultural Unit. Samy Feder was part of the Unit and his role was to organise a theatre. He had bravely produced shows in the concentration camp before it's liberation, which had been a very dangerous thing to do. Although seriously lacking in resources, Samy Feder managed to form a troupe which became known as the Yiddish Theatre and three months after liberation they put on their first performance in the Zelt Theater (the tented theatre) which was located in the area due west of the swimming pool. The evening was a great success and played to a full house of over a thousand people, made up mostly of DPs, relief workers and some Russian Officers who had driven 200 hundred miles to see the show. Following on from this successful start both the Kazet (KZ) Theatre and the Workers' Theatre troupes were formed and went on to perform many plays. In July 1945, the Zelt Theater was also the venue for a music concert given by the legendary violinist, Yehudi Menuhin, who was performing to troops and former prisoners of concentration camps all around Europe. On his first visit to Bergen-Belsen he was accompanied by none other than Benjamin Britten.

Sporting life became an important part of the lives of the younger members of the camp. The camp had an abundance of sporting facilities left over from its Wehrmacht days, with playing fields, gymnasiums and swimming pools. Sports clubs were soon established taking the names of famous Jewish Sports clubs of east European countries, names such as the Maccabi Sports Club, the Hagibor Sports Club, the Hatikva Sports Club and the Hapoel Sports Club.
Life in that first year was extremely difficult for the DPs, but as we have seen they very quickly organised themselves into a self-governing community that was able to take the first steps back to some kind of rehabilitation. Under the able leadership of the Belsen Committee they were able to police themselves, educate themselves, and entertain themselves. These activities however, were all within the confines of the Bergen-Belsen camp from which they were not allowed to move, liberation had not produced the freedom it once promised.
CONTINUED UNDER PART 4
Posted by Dachau KZ at 10:16 PM