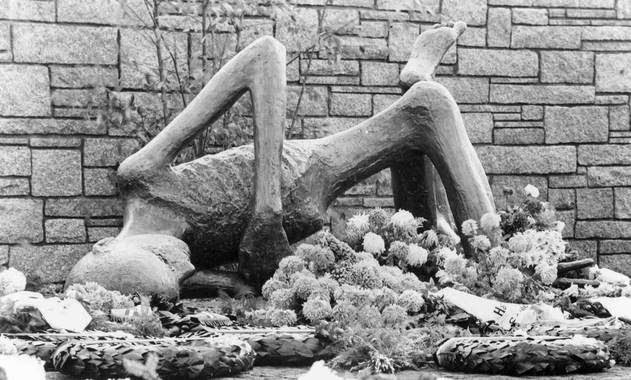 THE PRISONER SOCIETY
In general, the inmates of the various groups and nationalities were distributed into accommodations that were mixed. [This was done for security reasons,sic]. It was different with the Jews and by the SS  particularly hated Jehovah's Witnesses who were in the second half of 1940  from other prisoners billeted together in their own block. [Normally Jehovah's Witnesses were trusted by the SS, for example in Dachau a handful of women prisoners did wear their civilian garments and had a free pass to do minor shoppings and other duties for them in the city].  In June 1942, the penal company, newly formed was isolated and housed from the rest of the inmates. [As a rule prisoners held in a penal company (Strafkompanie) were their own SS members that had been incarcerated refusing to shoot hostages or other given orders.sic]
Since the winter of 1940-41 the incoming transports to Neuengamme concentration camp consisted mostly of foreign prisoners. Soon their number overtook the German nationalities by far. During the war, the Gestapo and the SS Security Service (Sicherheitspolizei), deported tens of thousands from all the occupied countries of Europe as concentration camp prisoners to Hamburg-Neuengamme. They were mostly people who resisted what the German occupation regime had done, in retaliation they had fallen victims by the Wehrmacht and SS who had rebelled against the prescribed forced labour or were persecuted as Jews. Many detainees were subjected to arbitrary reprisals. Among them were, for example, several thousand that were arrested after the Warsaw Uprising in 1944, Polish women and men, or the 589 men from the Dutch village of Putten, who were deported in October 1944 in retaliation for an attack  on a Wehrmacht Army car, and transported to the Neuengamme concentration camp, only 49 of them ever returned . Putten was later called the 'Village of Widows and Orphans'.
Among the foreign prisoners were also many who had previously been deported to Hamburg and the surrounding area as forced labourers and had violated against their instruction from the 'Department for Foreigners' against 'work sabotage', escape attempts or other forms of 'refractoriness' by the Hamburg Gestapo. As the police prison at Fuhlsbüttel in 1943 was overcrowded, the Gestapo termed a large number of prisoners as 'police detainees' and transferred them to Neuengamme. These formed a special group of prisoners in the camp with its own numbering system, also with an arm band reading 'gate lock'(Torsperre), individuals were prominently marked with one side shaved of their head hair. As their trials were scheduled in front of a civil court, this was a precautionary measure which should prevent them to be used in an outside working assignment,  thus offer them the possibility of an escape. The 'police detainees' were members of various German resistance groups of Hamburger citizens, such as members of student opposition circles "Hamburg branch of the White Rose". [For further reading see: http://www.katjasdacha.com/whiterose/biographies/hcleipelt.html]

The foreign prisoners were, apart from few exceptions, marked with the red triangle as the 'Politicals',(Politischen) while their nationality was highlighted by an abbreviation stencilled onto their triangle. Among the total of approximately 9,200 Germans, which presented the majority [at that time, sic] were marked with a green triangle as 'Criminals',(Kriminellen)  these prisoners had been taken into custody for alleged 'crime prevention reasons' and those as 'preventive detainees',(Vorbeugehäftlinge)  prisoners held by the Justice Department including 'security detainees'(Sicherheitsverwahrten) and people as assumed by the SS  were marked with a black triangle as 'asocial' (Asoziale). In addition to the group of 'political protective custody prisoners' under which dominated mostly communist resistance fighters imprisoned since the 1930s, there were still a few hundred of their homosexuality members wearing a pink triangle, about the same number were racially persecuted Sinti and Roma and subsumed by the SS as 'asocial' (Asoziale), as well as 200 Yahovah's Witnesses, which were marked with a purple triangle. After the attempted coup of 20 July 1944, the Gestapo delivered as part of 'Operation Storm'(Aktion Gewitter) some 800 former union officials and former activists, especially the workers' parties of the SPD and KPD into the concentration camps, although some had been in Dachau since 1930's. These were often older prisoners who were released in part after a few weeks or months, one of them was the future SPD chairman Kurt Schumacher. [He had lost his right arm in the First World War, and twelve years in Nazi concentration camps had left him so physically weakened that one of his legs had to be amputated. For these reasons, and in recognition of his uncompromising defence of the Weimar Republic up to his arrest by the Nazis in 1933, Schumacher possessed unchallengeable moral authority in the postwar SPD, he died 1952.sic]

The Jews, depending on the reason for their internment (Haftgrund) had a second yellow star added to their patch in the opposite direction, so that a hexagonal 'Star of David' was created. They formed in the Neuengamme KZ initially a relatively small group of a few hundred prisoners. From 1940 to 1942, their share amounted to little more than five percent. The Jewish prisoners were subjected to very extreme conditions. When work assignments for the 'Commando Elbe' were assembled as well as the prisoners of the penal company who had to work on Sundays, the SS  put them together into specific columns. There the Jews had to endure many tortures and harassments. Included for example the infamous 'death round'(Todesrunde) in which prisoners with overflowing carts, and often under beatings,  had to go on the run several times and make additional rounds. Functions in the prisoner administration were not allowed to cloth the Jewish prisoners in general. The reception of parcels for them was forbidden, as were, from time to time, any correspondence. For a long time they also were forbidden in entering the infirmary, so that medical treatment of the sick and care for wounds from work accidents  was omitted entirely. The deplorable working conditions and the continued mistreatment caused a large number of deaths among the Jewish prisoners: 130 of them, that is every third to fourth died in the first nine months of 1942.
The Jews who had not yet fallen victim to the terror, were taken away without exception from the Neuengamme concentration camp during the summer and fall of 1942. In the first group are those under the Aktion 14f13 selectees who were murdered in June 1942 in the gas chamber of Bernburg. The remaining Jewish prisoners in Neuengamme were deported in the fall of 1942 to the Auschwitz concentration camp. This was done in executing an instruction that the commander had received from the SS-WVHA on 5 October 1942, in which it was said that 'all Jews located in the Reich KL shoud be free of Jews' (judenfrei) upon request by the the Reichsführer SS Heinrich Himmler.
Although the racial ideology classification towards the different treatment of the various nationalities in the camp was, but for their respective positions in the camp, and for other factors very decisive. First ranked the Czechs and still more so the Poles that since 1941/42 formed the largest national group, which by SS standards were at the lower end of the scale value. While non-Jewish German prisoners usually after a certain time gained access to relatively easy employment, in offices and other functions, and also from the fall of 1941, the  Belgians and the Dutch had opportunities for improvements during their internment.  Members of the Slavic nations were often for several months exposed to the deadly long term conditions in the mass assignments with excavation and construction work, such as the 'Commando Elbe'. They were also particularly victims of abuse. Still unequal bad was the situation in October 1941 of the secreted 1,000 Soviet prisoners of war at the camp. They were given no chance of survival, their treatment was rather part of a racial extermination policy. In 1942 Russian and Ukrainian slave labourers were brought in large numbers into the camp, and moved to the bottom end of the national ranking. With their intake mainly Soviet prisoners now presented the strongest group in the concentration camp from 1943,  used in the heaviest work details, the clay pits and the construction of the docks as well as excavation, in the 'Commando Manufacturing Site'(Kommando Fertigungsstelle) where particularly infamous 'green' and 'black' Kapos on behest of the SS abused and killed countless prisoners.
In addition to the racial hierarchy which was applied for a national group, as for each inmate, but also the time of entry was of decisive importance. The later a group came into the camp, the more difficult it was for them to compete there. Inmate functions, craftsmen and skilled workers, and other places of survival possibilities bidding for these jobs were already occupied. Since the living conditions generally worsened, the situation for 'newcomers' was now more difficult. Including particularly the Danes and French that in 1944 were brought in large numbers into the concentration camp had to suffer when used for the hardest work details and in satellite camps regardless of their position in the racially biological value scale of the SS, while not a few Polish, sometimes even Soviet prisoners, especially if they had specific professional skills were now moved up in the camp hierarchy as skilled workers taking positions in armaments production or were partly the reason for survival with their up-scale tasks. In this temporal shift in the French prisoners accounts in the camp which can be explained in a comparatively high death rate.
From the diversity of the individual prisoner groups to form  a coercive society in the camp, numerous problems were found. A major difficulty was in the various languages, another was the sometimes competing group interests. The SS tried the national resentment among the prisoners and  matches them between the different groups to foment existing contradictions and encourage them to their own deceitful purposes.