and lasted to January 1946:Eisenhower made us DEF's "Disarmed Enemy Forces",thus had no rights under the Geneva Convention 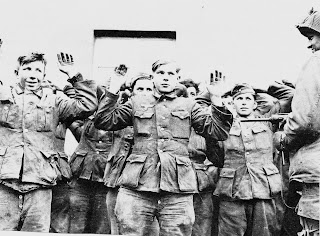 An American solders guards members recruted from the Hitler Jugend,although they are in Wehrmacht Uniform, the Western Allies tended to treat HJ as children fighting because they had no choice, the Soviets made no such distinction, and treated Hitler Youth members as ruthlessly as adult soldiers. This picture seems to be staged, if you look into their faces of the "captured" youth there are no expression of fear or apprehension, and were perhaps members of a Labor Service Company. Their trousers are "work pants". 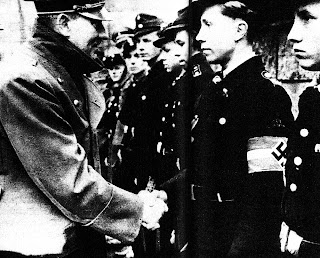 It was an entirely different position the Allies took when HJ members were captured or surrendered in their original uniform, with their swastica armband on their sleeves. On April 20th 1945 Hitler decorated some of them who had seen action in Berlin. These boys had no rights under any rules to be treated as POW's when captured and were faced with summary execution. One boy in this picture survived and is mentioned in the memoirs of one of Hitler's secretary. I might be able to come back to this later. 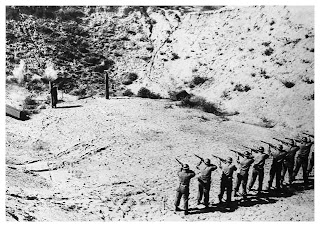 Not only was Heinz Petry mere 16 year old when executed, his execution took place on June 11, 1945 -long after World War II hostilities in Europe ended.

There were actually three boys, two of them students of AHS.(Adolf Hitler School) Of the latter one who was arrested by the Americans, could escape. The other two were convicted and executed on 01.06.1945. That was the Adolf Hitler students Heinz Petry and the Hitler Youth Josef Schöner (not Schener). In the court's opinion of the U.S. military the accusation of spying served only as a pretext for the Chairman of the Military Court who emphasized in the court's opinion "that the responsibility for the fate of the two boys lies with the Nazi leaders, and they only, will send send them  to their deaths. The German military and political leaders force us", said the chairman,"to fight fire with fire and blood with blood. We will not tolerate those responsible to hide behind women and children". Unless the presiding judge considered this a "deterrent sentence", he unjustly sentenced the sixteen and seventeen year-old boys whose guilt as so called spies did not justify the death penalty. Read the text quoted in the "Aachen News"
View: YouTube: https://www.youtube.com/watch?v=5yaG7uTPQ6M 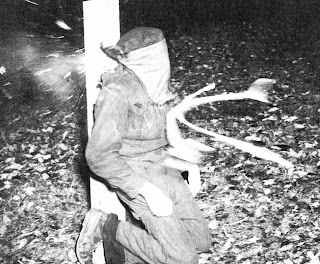 A typical method the American Army applied during execution by firing squad, a stake in the ground, rope around the prisoner and blindfolded, usually hands tied behing the stake. This photograph shows the victim's body falling as bullets sever the rope which had tied him to the stake. Wooden splinters are cascading through the air. The victim in this case was French 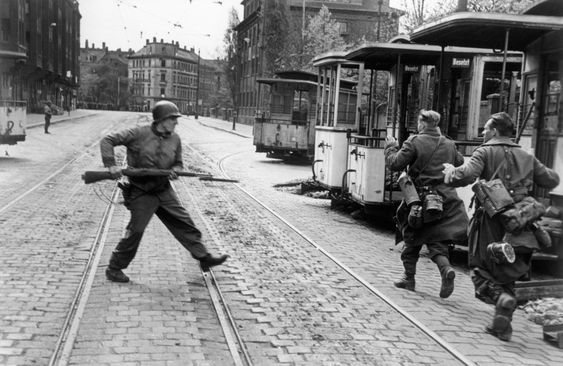 April 18th, 1945. Immediately after an American soldier had been killed, his comrades went down to the street to capture the snipers who , killed his comrade 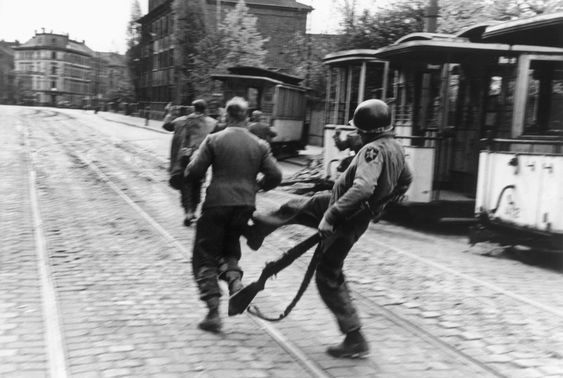 
to be continued on 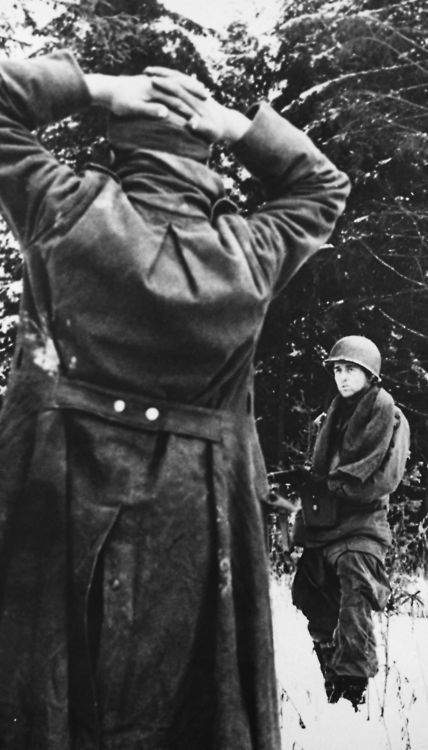 On 20 April, his 56th birthday, Hitler made his last trip from the
Führerbunker ("Führer's shelter") to the surface. In the ruined garden
of the Reich Chancellery, he awarded Iron Crosses to boy soldiers of the
Hitler Youth. By 21 April, Georgy Zhukov's 1st Belorussian Front had
broken through the defences of German General Gotthard Heinrici's Army
Group Vistula during the Battle of the Seelow Heights and advanced into
the outskirts of Berlin. In denial about the dire situation, Hitler
placed his hopes on the undermanned and under-equipped Armeeabteilung
Steiner (Army Detachment Steiner), commanded by Waffen SS General Felix
Steiner. Hitler ordered Steiner to attack the northern flank of the
salient and the German Ninth Army was ordered to attack northward in a
pincer attack.
During a military conference on 22 April, Hitler asked about Steiner's
offensive. He was told that the attack had not been launched and that
the Soviets had entered Berlin. This prompted Hitler to ask everyone
except Wilhelm Keitel, Alfred Jodl, Hans Krebs, and Wilhelm Burgdorf to
leave the room. Hitler then launched a tirade against the treachery and
incompetence of his commanders, culminating in his declaration—for the
first time—that the war was lost. Hitler announced that he would stay in
Berlin until the end and then shoot himself.
By 23 April the Red Army had completely surrounded Berlin, and Goebbels
made a proclamation urging its citizens to defend the city. That same
day, Göring sent a telegram from Berchtesgaden, arguing that since
Hitler was isolated in Berlin, he, Göring, should assume leadership of
Germany. Göring set a deadline after which he would consider Hitler
incapacitated. Hitler responded by having Göring arrested, and in his
last will and testament, written on 29 April, he removed Göring from all
government positions. On 28 April Hitler discovered that Himmler, who
had left Berlin on 20 April, was trying to discuss surrender terms with
the Western Allies. He ordered Himmler's arrest and had Hermann Fegelein
(Himmler's SS representative at Hitler's HQ in Berlin) shot.
After midnight on 29 April, Hitler married Eva Braun in a small civil
ceremony in the Führerbunker. After a modest wedding breakfast with his
new wife, he then took secretary Traudl Junge to another room and
dictated his will. The event was witnessed and documents signed by
Krebs, Burgdorf, Goebbels, and Bormann. Later that afternoon, Hitler was
informed of the execution of Mussolini, which presumably increased his
determination to avoid capture.
On 30 April 1945, after intense street-to-street combat, when Soviet
troops were within a block or two of the Reich Chancellery, Hitler and
Braun committed suicide; Braun bit into a cyanide capsule and Hitler
shot himself. Both their bodies were carried up the stairs and through
the bunker's emergency exit to the bombed-out garden behind the Reich
Chancellery, where they were placed in a bomb crater and doused with
petrol. The corpses were set on fire as the Red Army shelling continued.
Berlin surrendered on 2 May. Records in the Soviet archives, obtained
after the fall of the Soviet Union, state that the remains of Hitler,
Braun, Joseph and Magda Goebbels, the six Goebbels children, General
Hans Krebs, and Hitler's dogs were repeatedly buried and exhumed. On 4
April 1970, a Soviet KGB team used detailed burial charts to exhume five
wooden boxes at the SMERSH facility in Magdeburg. The remains from the
boxes were burned, crushed, and scattered into the Biederitz river, a
tributary of the nearby Elbe. According to Ian Kershaw the corpses of
Braun and Hitler were fully burned when the Red Army found them, and
only a lower jaw with dental work could be identified as Hitler's remains.