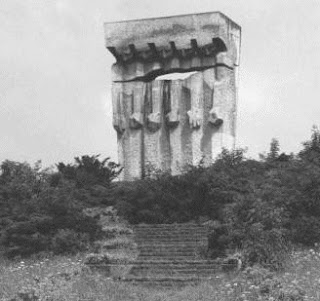 EXECUTIONS AND DEPORTATIONS TO AUSCHWITZ
Plaszow can be characterised at the beginning by arbitrary killings and atrocities without regard to the preservation of the prison labour potential. The camp was under the jurisdiction of the SS and Police Leader (SS- und Polizeiführer), and was thus free of any control.  Most assaults and abuses  occurred In 1943, for which some members of the camp SS were sentenced later.
One of the first executions at Plaszow was the hanging of two young women in March 1943, who had dared to escape. All prisoners had to be present during the hanging at roll call. On 3 August 1943, two Jews, engineer Krautwirth and a 16-year-old youth named Haubenstock were hanged for alleged communist views, they had been singing a Russian duet, which in the views of the SS was a Bolshevik song. In October 1943, some prisoners who were employed in the administration were killed. They had stored food in their rooms, which Göth had found. All subjects were taken to the "Hujowa Gorka" site and shot there. In July 1943, the SS-men, Staib and Grün shot and killed three Jews in the brush-working barrack, whom they surprised in prayer. SS corporal William Staib, because of his glass eye was called by the inmates 'Oczko' (Äuglein), he was a sadist who beat with particular fondness into the faces of inmates with his riding whip. SS-man Wolfgang Gross was said to have been in love with a pretty Jewish girl. In late summer of 1943 they were caught together 'in flagranti' by Göth at the SS-Accommodation and Göth  commanded, she [the girl, sic] to be killed. SS Sergeant Albert Hujar shot her and her little brother. [Statement of Naphtali D. 3/26/1079, in: ibid B 162/1126, page 2896, sic]
Göth owned by two dogs,  a Great Dane, 'Rolf' and a Shepherd 'Alf', who only came into the camp as  his escorts. Both were trained to attack people on command, to bite or even kill.  What can be proven that at least one prisoner  on command by Göth was attacked and mauled by the dogs. [Statement by the accused Karl-Heinz Bigell,  that one of the dogs mauled and fatally injured inmate Olmer and he killed him with a well aimed shot through the head, in ibid, AR-Z 60I/67 Vol 4, page 1346, sic]

All witnesses stressed that the SS-man Grün, had reached a particularly sadistic level of violence. "His greatest pleasure was walking around in all corners of the camp. He suddenly appeared where he was not expected and in most cases found victims, and would punish them  in various different ways". By order of Göth he shot the administrative staff member, Goldstein, who had written all night secret correspondence for Göth. [Thus he knew too much and had to go,sic] A very decent SS man was the chief of the Construction Management in the camp, Engineer Huth, a number of inmates in their post-war statements did speak highly of him.
Inside the camp there were three killing centres, two of which were used mainly for the shooting of prisoners by the Gestapo. The first and oldest of sites, the prisoners called it "the Excavator"(Bagger) and was located next to the bathhouse. The name went back to an old stationary excavators that covered the bodies with earth. Whatever the circumstances, when a prisoner in the camp died, it was said he was "gone under the Excavator"(unter dem Bagger gegangen). At this location  approximately 270 Jews were shot, who were tracked down out of their hiding places when the ghetto was liquidated. The shootings were committed and led by the SS-men Francis Grün, Arwin Janetz, Albert Hujar and Edmund Zdrojewski. Right next to the excavator in the immediate vicinity of the old bath house area, smaller groups were killed. Some distance away, towards the roll call grounds, there was a slight elevation, were the larger groups were shot and the bodies then placed into a pit. Later on the new bath house, a delousing station and some barracks were built onto this site. There are  almost 2,000 Jews  buried there who had been shot in the course of the ghetto closure on March 13, 1943, [A funeral employee (Leichengräber) , counted the bodies as 1860 murdered in his statement: AZIH Warsaw, 302 / Report No. 3851, sic], as well as  38 Jews from Bochnia, which were in possession of foreign securities on March 28, had been shot and buried there. They were  transported by truck to Plaszow  from the Gestapo jail, housed in Bochnia Montelupich by the commanders of the Security Police and SD,  Max Grosskopf,  Rudolph Körner, Kurt Heinemeyer and killed there.

The approximately 130-200 elderly, the sick and children from the disbanded Jewish Labour Camp I in November 1943 had been executed at this point as well. When, after a campaign (Aktion) in the ghetto of Bochnia in the fall of 1943 a large group of Jews was deported to Plaszow, the Germans selected from the newcomers, a group of ten to 20 older people and commander Göth ordered SS-man Wolfgang Gross to have them shot during the night at "the Bagger". "Hujowa Gorka" was the second of the three execution sites in Plaszow, where there were shootings at the end of summer 1943.  This place was a former Austrian artillery site from World War I. The land rises slightly above the surrounding terrain, which is why it was called in camp jargon as "Gorka" (hill). "Hujowa", sometimes "Chulowa" is a vulgar term for the male reproductive organ, a pun on the SS man Hujar,(a chuja=a dick)  who often took part in the shootings. This hill was clearly visible for working prisoners from the new expanding  terrain. The executions themselves were carried out in pits and could not be observed, one could only guess when prisoners had arrived and shots were heard. Although no one was allowed at the time of the executions in the vicinity,  there were  situations when camp inmates could monitor the approaching trucks, which brought victims to the execution site.
At "Hujowa Gorka" mainly non-Jewish Poles died there, prisoners from the Gestapo prison in the Pomorska Sraße of Montelupich were trucked-in to the site.

The group succeeded to steal two revolvers from the weapons depot in the camp and from SS man Scheidt two automatic pistols. Samuel Kempler, who was the [horse] riding instructor and stable manager of Göth's, had  the privilege to leave the camp, during a chance meeting with a member of the communist Polish Workers' Party (PPR) by the name of Laptas, he was able to obtain 100 cartridges and additional guns which he smuggled into the camp. The weapons were hidden in the metal processing workshops under the floor. From small sewer pipes and gunpowder (Schwarzpulver) from the quarry, hand grenades were manufactured. Rumours about the hidden weapons reached the SS, Adam Stab was arrested and tortured, he betrayed neither accomplices nor the whereabouts of the weapons. Of his execution on 13 August 1944, the same day that the camp leader Chilowicz and his wife were killed, several versions have survived. Some report that he died by hanging, others that Göth shot him. What all stories have in common is, that Adam Stab, a very young man who showed great courage and resisted the torture of the SS. [see:Müller-Madej, Das Mädchen, page 8If, and Biberstein, Zaglada, page 276, sic]
The group also managed in helping some inmates to escape,  who then joined the partisans. With the assistance of bribed guards prisoners were taken at night hidden under garbage onto the landfill outside. Among the escapees were two doctors, Dr. Otto Schwarz and Dr. Romuald Sachs. In the Watch-making Barrack No. 83, a radio was kept hidden. The Polish civil engineer Boleslaw Kowalski, who worked in the camp, although he was not a prisoner, and had contacts with an underground organisations, succeeded in smuggling the three-year old Jozek Weinstein hidden in a bag in his car outside the camp. [see: Sliwinski, Periturus, page 79, sic]
continued under part 5