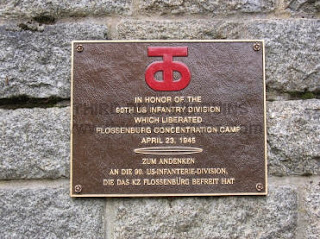 LIBERATION
On the morning of April 23 motorized patrols of the 358 and the 359 Infantry Regiment of the 90 Infantry Division 3rd U.S. Army reached camp Flossenburg. The soldiers were already expected. One of those left behind, the Czech camp clerk Emil Lezak, had immediately after the departure of the last column of inmates that marched out of the gate, found in the headquarters building a typewriter and began to write down his memories and experiences during his stay at Flossenburg. He had started this even before the liberation of the camp and wrote it in the German language. Emil Lezaks writings are the first historiography documentation of the concentration camp. On page ten it ends abruptly in the middle of a sentence:
'Now I have to interrupt, the liberators arrived!! It is the 23.4.45, 10.50 [a.m.] o'clock!!
I have already held the placard and hung it outside: 'Prisoners happy end-Welcome-'and immediately gave the first information regarding concealed weapons. A lieutenant with 4 other soldiers considered everything and now I can keep on writing'. [Ref: BArch Berlin, Microfilm FC 6279]

Of the prisoners left behind, between the 20th to the 23rd of April, more than 100 died on these days. The American military doctors and First Aid-men succeeded to save 1208 prisoners, for 105 of them, all the help had came too late, they died in the first days and weeks after the liberation. Because the Americans had an understandable fear of the prevailing diseases still being spread, their Units still cremated up to May 1st 1945 another 135 dead prisoner in the crematorium of the camp. However, the head of the first local Military Government, Major Samuel Gray, stopped this practice after protests of survivors and arranged on May 3rd a more decent burial of 21 deceased in the centre of the village of Flossenburg itself. Due to the extremely poor health of those remaining, every endeavour was made by the Military Government to provide medical care and the disinfection of the entire camp. After stabilization,  the rest of the convalescents were moved immediately from the camps enclosure and by the end of May 1945, the camp grounds were as good as empty.

In the seven years of its existence 100,000 prisoners in the Flossenburg concentration camp and the satellite camps were interned. By targeted killings, the catastrophic living conditions and the inferno of death marches more than 30,000 people died which came under the administration and responsibility of the Flossenburg complex . The number to have been murdered outright is estimated at 13.000 to 15.000. In the satellite camps it apparently were  more than 10,000 men and women. It is very difficult to asses the number of victims of the death marches but the figure is at least 5,000, but possibly 8,000 or more inmates. In the latter figures, however, it is not clear how many of the deaths are attributed to the Buchenwald camp complex. The list of quantities always involves the risk of unreliable entries of the concentration camp deaths. They should serve here only for the measurement of mass crimes in the concentration camp of Flossenburg and its satellite camps,  let alone the fears and anguish of prisoners in the camps, they can be just as much as the mental and physical suffering of the survivors.

EPILOGUE
After the war’s end the Flossenburg camp was used temporarily to lodge German prisoners of war, the UNRRA and refugees, displaced Persons (DP'S). Then in 1946, through the initiative of several local leaders, work was begun on a chapel and a graveyard at the site. The "Valley of Death" with its graves was laid out in the 1950s. Today some of the grounds of the former concentration camp are used as a housing project. The quarry is now run by a private concern.
Founding of the concentration camp had the means of a huge infrastructural modernization for the small village of Flossenburg. Within one year after the founding of the camp the population nearly doubled to a total of 2281. Through the establishment of the camp not only SS men and their families or civilian workers such as stone masons were drawn to the village. With the construction of the camp, new institutions were created for the site, a post office was opened and the entire local water supply for purposes of the camp was enlarged and re-aligned. Flossenburg possessed for the first time local access of doctors from the camp with complete medical care in place, which could also be used by its population. [This contrasts greatly with the alleged poor and brutal treatment of SS-doctors towards prisoners, sic]  In the numerous private houses and estates lived low to middle ranking  SS-men as lodgers, the SS became an integral part of village social and cultural life. Not only spatially close relations between camp and village can be impressively documented, including the example of the assignment of prisoners to work in the village. During the existence of the camp,  prisoner groups worked on virtually every private property and the surrounding area. Also, each incoming or outgoing prisoner transports had to pass through the small village on the only main road they had. In no other place where a concentration camp existed, influenced the  everyday life to such an extent as in Flossenburg. The camp had no extraterritorial place, it dominated the village economically, politically and socially. The interaction between village and camp was more than just a neighbourhood, in comparison with other camps, it can be characterized only as a total dominance of the camp over the entire place.
With the liberation of the camp, the American units had begun to secure any evidence of crimes that had been committed in the concentration camp which was to serve in a later court case against the alleged perpetrators as incriminating evidence. On June 12, 1946, the 'Dachau Trials' opened before the Court of the General Military Government which constituted the 'Main Flossenburger Process'(Hauptverfahren). This  process was to establish the crimes in the concentration camps and became the longest, lasting 142 days of negotiations to concentrate on Concentration Camp methods before any U.S. military Court in Germany at that time. At the beginning of the process, 52 people were indicted, including 16 former prisoners, who had held functionary positions in the camp. But shortly after the opening of the trial seven of the charges due to procedural methods were separated from the main process. Only the 'Parent Case' was initiated against 45 defendants. After initially taking evidence and the questioning of witnesses, in most cases severe penalties were imposed on January 20th 1947, against 42 defendants, including 15 death sentences, of which eleven were finally enforced by hangings at Landsberg Prison. Even West German courts conducted after lengthy time delays, a number of investigations and processes associated with the crimes committed in the concentration camp of Flossenburg. From 1958 on, the public prosecutors in Amberg, Regensburg and Weiden opened more than 200 investigations against accused individuals or groups, but in which only nine criminal sentences were passed. Numerous investigations against those responsible for crimes committed have been conducted in the DDR (East Germany), Czechoslovakia and Poland.

I dispensed partly with using the German Umlaut "ü" and used the letter "u" instead, in 'Flossenbürg', which will make very little difference to readers, yet I accept the usual criticism of Ph.D. Academics as to my 'bumbling' English as they say, in trying to translate the meaning of German expressions, which I found difficult at times,(no proof-reading was done) however, it keeps me sane and my brain active at my advanced age, thanks to my son Dean without his encouragement I might have given up, and the patience and tolerance of my wife Edith!