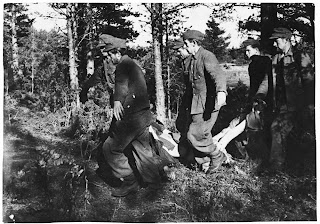 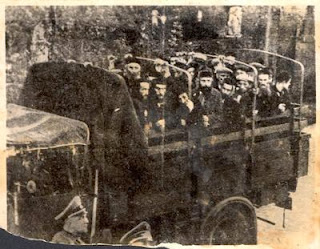 The last mass shootings took place at Lagedi and Klooga. On the18th September, the inmates were allegedly 'evacuated' from the camp Lagedi by truck, but killed in truth in a forest clearing. [The Central Office in Cologne in their initiated proceedings established a figure of 426 victims at Lagedi, refer: Central Office in Cologne, 24 Js 18/71 Z sic] The following day, the members of all work detail detachments from Laoküla were taken to Klooga, this area was sealed off with the help of 20 members of the Waffen-SS Division under the command  of the Training and Replacement Unit, under the command of Georg Ahlemann. An additional firing squad consisting of members of the squads of the Security Police of Estonia, which came from Reval. It is not clear who led on this day this Detachment because many members of the Concentration Camp Vaivara Administration were already present by midday  in Klooga. [There are very different informations about the origin of the firing squad, and the most credible appears to be the testimony of the cook of the Marine Unit in Klooga, who was also responsible for meals to the SS and OT. According to him, they arrived in the late morning, it was a 20-25 man strong command, all German-speaking individuals (which would exclude the Estonian guard company of any participation) all members of the Security Police of Klooga, for whom he had to cook as well, and then took part in the shootings, witness testimony William F ., 07/12/1966. In: Ludwigsburg BArch, B 162/5123, sic] Camp leader of Klooga at this time was William Werle, but who claimed that the higher ranking Administrative Leader Otto Brenneis had commanded the action. The prisoners were led in small groups from the camp and shot on  cremation pyres built beforehand and in an adjacent area. The corpses were set on fire later on by a detachment from Laoküla. Gradually, inmates, which were on the roll call square became restless, the sound of gunfire then triggered a panic and some started to flee. Slightly more than a hundred prisoners managed to remain in hiding until the Red Army arrived a few days later, some managed to escape from underneath the corpses as well. [I could not find in any German Court Investigations at Ludwigsburg as to the exact figure of the Klooga massacre, which is claimed to be a rather high figure. According to Soviet historiography, approximately 2,000 were shot, then their bodies were stacked onto wooden pyres and burned. Estonian Police Battalion 287 tried to defend prisoners and had a clash with the German unit. Soviet historiography is the methodology of history studies by historians in the Soviet Union (USSR). In the USSR, the study of history was marked by alternating periods of freedom allowed and restrictions imposed by the Communist Party of the Soviet Union (CPSU), and also by the struggle of historians to conduct history by their own estimates (or in their own words, "to guard against bourgeois historiography"). Soviet historiography in itself should be read with a certain amount of scepticism. Soviet historiography was affected by extreme ideological bias, and potentially compromised by the deliberate distortions and omissions as well as exaggeration.  Nevertheless I include the Soviet version of events HKS]


KLOOGA -  THE SOVIET INVESTIGATION
State Archives of the Russian Federation. Fund 7021. List 97. File 17a. Pages 95. Original. Typescript. 32 DOCUMENT 8 Report about atrocities of Nazis and their Estonian accomplices against prisoners of the Klooga concentration camp  September 29, 1944:

PRLOGUE
After the reincorporation of Estonia into the Soviet Union, the Vaivara complex at Klooga and Ereda became part of the memorization of World War II by the Soviet authorities, which was characterized by a mixture of memories of the victims of the German occupation and became legitimized by Soviet rule. In the newly independent Estonia these sentiments were not supported, which resulted sometimes in very violently discharged historical controversy between Estonia and Russia. In recent times, the 'United States Commission for the Protection of American Heritage Abroad' has undertaken the setting of memorial stones which are exclusively for Jewish victims. Originally only  excessive Soviet casualties should have continued, this was not done. Unfortunately, however, the text is historically incorrect to those previously presented in Klooga, Kiviöli, Vaivara, Ereda and Kuremäe memorial stones. The majority of the victims were not Jews.