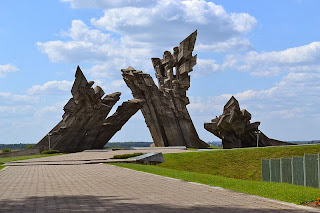 PROLOGUE:
In the history literature of the German occupation regime in the Soviet Union, the Lithuanian city of Kaunas  (Russian Kovno, German Kauen) is mostly mentioned if it comes to the transition to the genocide of the Jews. With the German arrival came in late June 1941 pogroms and mass shootings. From Kaunas with the death squads stationed there, commenced the killing of Jews from mid-August 1941, regardless of age and gender, and with the rapid ghettoising it  refers to the momentous transformation of the 'Nazi Jewish policy' (NS-Judenpolitik) to simply exterminate the Jews. By the end of 1941 the Security Police (Sipo) and Security Service (SD), considered the 'Jewish question' in Lithuania after the murder of close to 140,000 Jewish men, women and children as 'solved'. About the concentration camp Kauen however, there is very little knowledge or reliable evidence. Sources of that time are few and far between, and the (now in many cases published) survivor testimony focuses primarily on the events in the ghetto. The reason for the establishment of concentration camps in the 'Reichs Commissariat Ostland' (RKO) which was already set up with a German Civil Administration under Alfred Rosenberg as 'Minister for the Occupied Territories' in the summer of 1941 and included the 'General Commissariat' Lithuania, it was Himmlers order (Befehl) on the 21st of June, 1943, in which the Reichsführer of the SS ruled the closure of the remaining ghettos, and that the not employable Jews were 'to evacuate to the East', [this is a typical German euphemism,sic] in other words, to have them killed. But actually it was already planned in the early phase of the occupation for the establishment of concentration camps in the region. In addition to increasing war production requirements at low cost, by the exploitation of Jewish forced labourers, it kept the enforcement of the 'Final Solution' in mind as well as the goal of sustainable security 'pacification'. Ghetto and concentration camp Kaunus served the Administration and their Civil Managers alike as instruments of destruction, terror and enrichment. For the prisoners these were places of death, crime and despair.
EARLY PLANNING
With the beginning of the war of annihilation against the Soviet Union, the Nazi leadership has seen an opportunity to realize their visions of 'Lebensraum in the East'. Before the planned 'Eindeutschung' (Germanization) was the sustainable 'pacification' of the conquered countries. These were measures already introduced in the Reich and continued slowly in occupied  Poland by the segregation of unpopular groups, especially the Jews. It was primarily the responsibility of the Police led by Himmler, the SS and their Resettlement Apparatus, but also the efforts of other departments that worked in the same direction. The compiled policies of Rosenberg's Ministry Management  towards the 'Jewish question' saw as a first step, the 'solution to the overall problem' a 'transfer into ghettos'. Similar intentions were followed by the Wehrmacht in the 'Ostland' as it happened in the summer of 1941 in some cities, that 'Jewish concentration camps' were established.

Himmler's men in the Baltic states were experts with their leader of the Special Task Force led by SS-Major-general (SS-Brigadeführer) Stahlecker who directed Operational-Group-A. In round-up measures they refused to accept advice nor cooperation from other Field-Units, which they claimed, was their own field of expertise and showed very early individual initiatives to accomplish a given order. About two weeks after the start of the German attack on the Soviet Union on June 22, 1941 in the reported 'Event Messages USSR' (Ereignismeldungen) the leaders of Sipo and SD of the Task Force (EK) 3,  group A, showed plans to:  Re-vamp the uncoordinated pogroms in Kaunas, and stated that SS-Standartenführer (Colonel) Karl Jäger will establish a 'Jewish concentration camp' in Fort VII (which was part of a chain of defence systems around the city centre). In this camp Jewish men, women and children would be housed separately and mass executions were to be carried out. Another 'Jewish concentration camp' was planned in the Ninth Fort. By the time the 'Event Message' appeared in Berlin, Jäger had already completed his projects. Up to this point primarily Lithuania's  with the endorsement or initiative of German authorities had violently assaulted their Jewish neighbours. The first large combined 'Action' took place on 6 July 1941 in Kaunas, headed by the EK, which cost the lives of more than 2,500 mostly male Jews .

During World War II, parts of the fortress complex were used by the governments of Nazi Germany and the Soviet Union for detention, interrogation, and execution. About 50,000 people were executed there, including more than 30,000 victims of the Holocaust. Some sections have since been restored; the Ninth Fort houses a museum and memorial devoted to the victims of wartime mass executions. The complex is the most complete remaining example of a Russian Empire fortress.

The small rental apartments in architecturally unimpressive buildings once housed poor Jewish and non-Jewish families (rich Jews left Vilijampolė for better boroughs in the 19th century but were forced back during the German occupation in 1941). Even the local Catholic church building lacks the typical glory: built as a simple two-story house it received a tower only late in 2004.


OCCUPATION POLICY
The handling of the 'Jewish question' particular in the early phase of German occupation regime in Lithuania and the unbalanced interplay between economic considerations and possible adverse economic consequences in the pursuit of murders by the SS and police units, often with the participation of the armed forces (Wehrmacht), the Civil and the Lithuanian Auxiliary Administration, was often incredulous.  Jewish Men and women, old people and children in Jägers opinion, he maintained, that on the grounds of anxiety, they were a 'considerable risk factor for the troops in the rear'. As potential trouble spots alongside Jews there were other groups: In February 1942, Jäger asked his superiors of the KdS Lithuania, in Berlin, by recommending the creation of a concentration camp for prisoners of up to 3,000-4,000 not far from Kaunas. For the duration of the war there were people incarcerated, 'who had supported the Bolsheviks, no serious charges can be held against them, but at present a special treatment could not be justified'. A release of these prisoners from overcrowded prisons is, 'with regard to the safety of the rear army(rückwärtiges Heeresgebiet) is impossible'. About the Jews as prisoners in Jägers writings was also little mention of how the existing Kaunas ghetto should be dissolved, but he reveals that the objective is essentially the same as his Sipo colleagues in the 'Ostland': The camp can  be 'a very lucrative operation', by forcing the prisoners to break down the large peat deposits in the area.
In their efforts to create concentration camps, the regional Security Police commanders were more guided by functional rather than formalistic considerations in this early phase of German rule of occupation. This corresponded in their task with the largely independently self-understanding acting SS officers and their own interests. Whether concentration camps, ' camps for Jews' or ghettos, it was important to them in their planned design, to have total control of safety and policing. (sicerheitspolizeiliche Kontrolle). With this objective, they followed the lead of their leadership, but the initiatives of Stahlecker, Lange and Jäger, did not receive a positive reaction from Berlin at this time. Firstly, the SS headquarters was not convinced of the economic viability of new camps. They did not approve of another haphazard proliferation of concentration camp systems that required an Administration and had to be fed. For the RSHA therefore, the establishment of concentration camps was out of question. Instead, Sipo and SD in the 'Ostland' in question, could under Stahlecker's direction set up only extended police prisons or work camps (Arbeitserziehungslager). Secondly, they raised the question of the crucial civil administration, who were sub-ordinate to the stationed Sipo and SD commanders in accordance with Hitler's instructions (Hitler-Anweisung), who would claim a decisive voice in dealing with the 'Jewish question'. When Rosenberg's first governors took up their new posts in the 'Ostland' at the end of July, 1941, they could only prevail through official channels of the Sipo and SD Departments, although they were responsible for the civil administration and the supervision of the ghetto, with its extensive labour and enrichment potential, while Stahlecker's men kept the overall security police control of all facilities in the ghetto.
The course of their representatives in the 'East' would not always meet with the approval of the Berlin SS guide lines, but somehow they increased their willingness to act more radically than before. At a meeting of the 'solution of the Jewish question' in October 1941 Heydrich and Eichmann decided , that Jews from the Reich and the 'Protectorate' in camps for communist prisoners be deported into the operational area'. Gypsies were to be brought to Riga 'where Stahlecker, whose camp is set up according to the pattern of Sachsenhausen ', despite the fact that once before creating such a concentration camp had explicitly prohibited by the RSHA. Shortly after the deportation of Jews from the Reich and the Protectorate began into the ghettos of  'Ostland', where the initiators seemed confident that they would already know, what to do with the displaced people. In fact, Sipo and SD proceeded at its own discretion. In Kaunas, which was not originally intended as the destination of these transports, the nearly 5,000 Jews were deported from the Reich and immediately shot in late November after their arrival at Fort IX, and not, as the majority of German Jews deported to Minsk and Riga to the ghetto as first instructed. [Ref.: Generic for the deportation of German Jews in the Ostland. Hans Safrian, 'Die Eichmann-Männer, Wien, pages 134-168, HKS]