Prologue:
Operation Barbarossa, the German invasion of the Soviet Union, started on 22 June 1941, and all the Waffen-SS formations participated (including the SS Reich, which was formally renamed to SS Das Reich by the Fall of 1941).
SS Division Nord in northern Finland took part in Operation Arctic Fox with the Finnish Army and fought at the disastrous battle of Salla, where against strong Soviet forces they suffered 300 killed and 400 wounded in the first two days of the invasion. Thick forests and heavy smoke from forest fires disoriented the troops and the division's units completely fell apart. By the end of 1941, Nord had suffered severe casualties. Over the winter of 1941–42 it received replacements from the general pool of Waffen-SS recruits, who were supposedly younger and better trained than the SS men of the original formation, which had been drawn largely from Totenkopfstandarten of Nazi concentration camp guards. The rest of the Waffen-SS divisions and brigades fared better. The SS Totenkopf and Polizei divisions were attached to Army Group North, with the mission to advance through the Baltic states and on to Leningrad. The SS Division Das Reich was with Army Group Centre and headed towards Moscow. The SS Division Wiking and the Leibstandarte were with Army Group South, heading for the Ukraine and the city of Kiev.
The war in the Soviet Union proceeded well at first, but the cost to the Waffen-SS was extreme: by late October the Leibstandarte was at half strength due to enemy action and dysentery that swept through the ranks. Das Reich lost 60% of its strength and was still to take part in the Battle of Moscow. The unit was decimated in the following Soviet offensive. The Der Führer Regiment was reduced to 35 men out of the 2,000 that had started the campaign in June. Altogether, the Waffen-SS had suffered 43,000 casualties.
While the Leibstandarte and the SS divisions were fighting in the front line, behind the lines it was a different story. The 1st SS Infantry and 2nd SS Infantry Brigades, which had been formed from surplus concentration camp guards of the SS-TV, and the SS Cavalry Brigade moved into the Soviet Union behind the advancing armies. At first they fought Soviet partisans and cut off units of the Red Army in the rear of Army Group South, capturing 7,000 prisoners of war, but from mid-August 1941 until late 1942 they were assigned to the Reich Main Security Office headed by Reinhard Heydrich. The brigades were now used for rear area security and policing, and were no longer under Army or Waffen-SS command. In the autumn of 1941, they left the anti-partisan role to other units and actively took part in the Holocaust. While assisting the Einsatzgruppen, they participated in the liquidation of the Jewish population of the Soviet Union, forming firing parties when required. The three brigades were responsible for the murder of tens of thousands by the end of 1941. 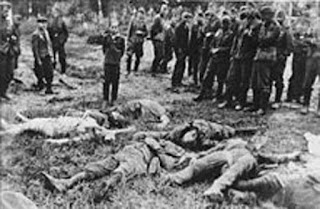 A teenage boy views his murdered family before his own death. Zboriv, Ukraine, 1941
Because it was more mobile and better able to carry out large-scale operations, the SS Cavalry Brigade played a pivotal role in the transition to the wholesale extermination of the Jewish population. On 27 July, the Brigade was ordered into action, and by 1 August the SS Cavalry Regiment was responsible for the death of 800 people; by 6 August, this total had reached 3,000 "Jews and partisans". On 1 August, after a meeting between Himmler, Erich von Bach-Zelewski and Hinrich Lohse, the brigades received the following order: "Explicit order by RFSS: All Jews must be shot. Drive the female Jews into the swamps."

Gustav Lombard, on receiving the order, advised his Battalion that "In future not one male Jew is to remain alive, not one family in the villages."Throughout the next weeks, soldiers of SS Cavalry Regiment 1 under Lombard's command murdered an estimated 11,000 Jews and more than 400 dispersed soldiers of the Red Army. 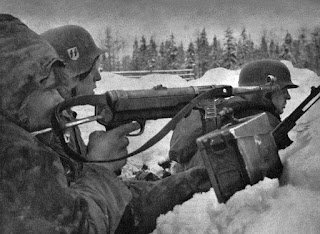 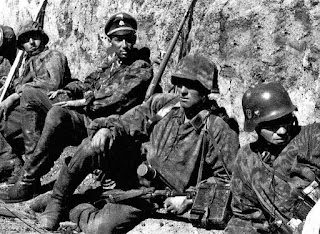 A German war correspondent with the Waffen SS soldiers seen before Battle of Kursk. SS-Obersturmführer Friedrich Kriegsberichter Zschäckel was a veteran war reporter who went first with SS Panzer Division "Das Reich" in the attack towards Moscow in 1941. In early 1942 he was with the Division "Nord" and then stayed in France with "Leibstandarte" in the summer of the same year. In 1943 he joined with "Totenkopf" during the battle at Kharkov, and then came back with "Das Reich"during Kursk. In 1944 he was with "Hitlerjugend" in Normandy, and is believed to have died in October 1944 (a German documents collected along with archival sheet at the U.S. National Archives say the exact same thing: "believed to have died in October 1944" without any additional information). Zschäckel won the Iron Cross Class 1, and was promoted to Obersturmführer on 20 April 1943. This made him one of the highest ranked Waffen-SS war photographer, who went covered most fronts and divisions! The photo above shows  Zschäckel in an anti-tank trench during the first days of Operation Zitadelle July 1943. This photo was taken by SS-KB Hermann Groenert serving with the division "Totenkopf". 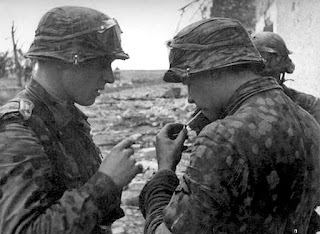 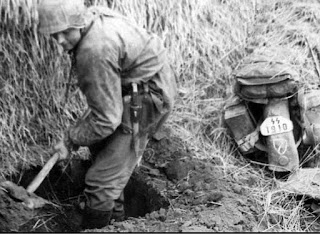 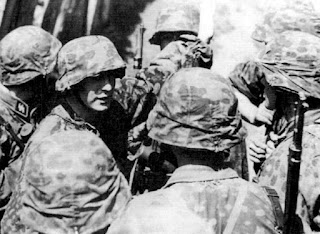 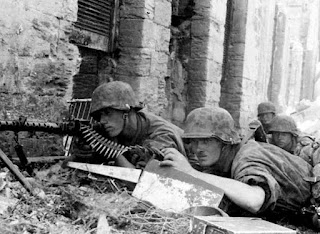 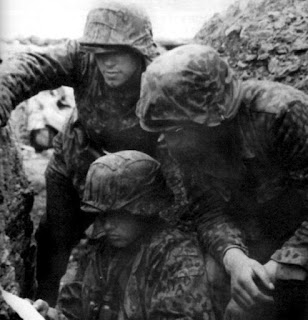 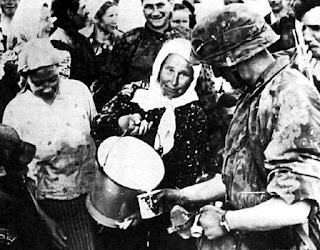 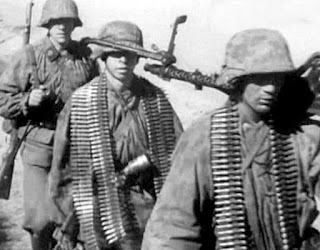 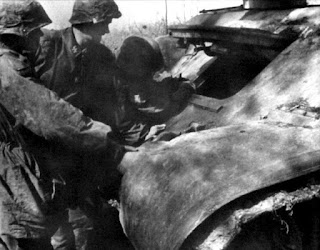 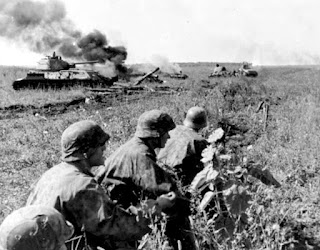 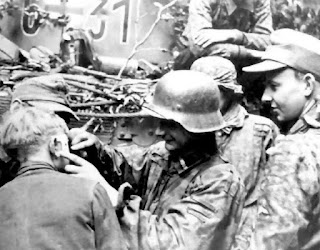 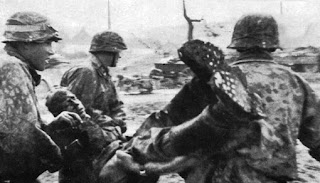 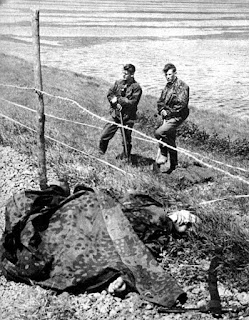 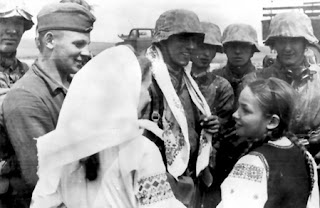 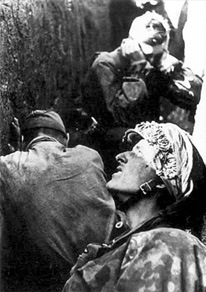 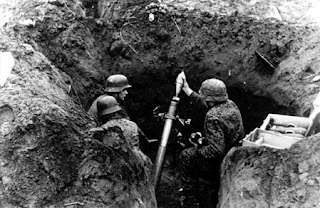 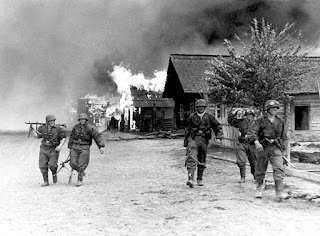 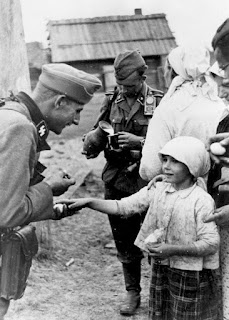 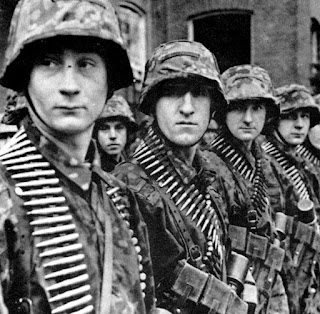 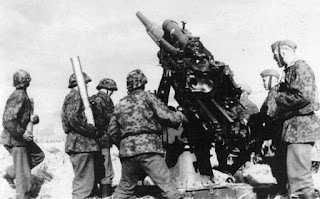