German soldiers inspect an abandoned Russian T-34 tank. The tank proved to be best amongst all tanks used during WW2. In the background a German convoy moves inexorably into Russia. 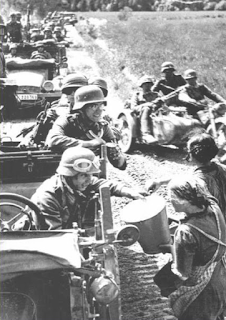 Ukrainian women give German soldiers water to drink. Initially the German were welcomed in Ukraine. They were sick of Stalin's brutal ways. But when the bad boys from the Einsatzgruppen came in the wake of the Wehrmacht it began to dawn on the people there that the Germans were worse; they turned against them. 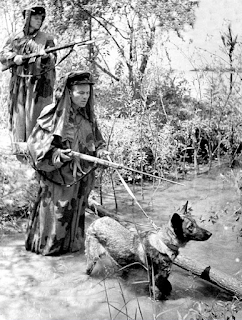 June 20, 1941. Russian border guards were blissfully unaware about the tidal wave that was to burst through two days later.

ATTACK ON GRODNO
In the darkness of the night of June 23, 1941 an infernal fire from the heavens suddenly rocked Grodno. Grodno was one of those cities in the Russian zone which was the first to be the victim of the lightning air raid by the Nazi warplanes. Wave after wave of air raids stormed down upon Grodno, spreading a hailstorm of bombs, explosions and fires. The first bombs fell in the area of the bridge by the Nieman river, near the army barracks. A paralyzing panic overtook the distraught residents, who at first did not realize the extent of their tragedy, and had no idea as to how and where to find refuge. The Soviet forces retreated in panic, taking with them only their own people and local residents who had worked in the administrative apparatus. 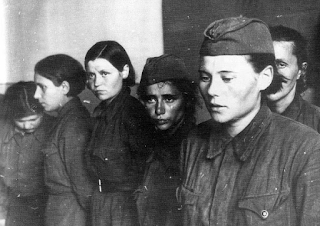 Captured women Soviet soldiers at Nevel (Pskov area). With reference to the mass rape of German women in 1945 by the Russian army; we must keep in mind the number of rapes that German soldiers committed in Soviet Union. German soldiers were no angels.


WHAT WAS THE STALIN LINE?
The Stalin Line was a line of fortifications along the western border of the Soviet Union. Work began on the system in the 1920s to protect the USSR against attacks from the West. The line was made up of concrete bunkers and gun emplacements, somewhat similar but less elaborate than the Maginot Line. It was not a continuous line of defenses along the entire border but rather a network of fortified regions, meant to channel the potential invaders along certain corridors.
In the aftermath of the Molotov-Ribbentrop Pact, with the westward expansion of the USSR in 1939 and 1940, into Poland, the Baltic, and Bessarabia the decision was made to abandon the line in favour of constructing the so-called Molotov Line further west, along the new border of the USSR. A number of Russian generals felt that it would be better to keep both lines and have defence in depth, but this conflicted with the pre-World War II Soviet military doctrine. Thus the guns were moved, but were mostly in storage as the new line began construction.
The 1941 German invasion caught the new line unfinished and the Stalin Line largely abandoned and in disrepair. Neither was thus of any use in stopping the onslaught of Operation Barbarossa, though parts of the Stalin Line were manned in time and contributed to the defense. Following World War II, the line was not maintained, in part due to its wide dispersal across the USSR. Unlike in Western Europe, where similar fortifications were demolished for development and safety reasons, much of the line survived beyond the breakup of the USSR in 1991 due to being ignored. Today, the remains of the Stalin Line fortifications are located in Belarus, Russia and Ukraine.


STALIN'S ORDER NO.207
At the onset of the Great Patriotic War between Germany and the Soviet Union, Joseph Stalin issued the infamous Order Number 207 on August 16, 1941. The order condemned those who surrendered to the enemy and, regardless of the circumstances, those soldiers and commanders were treated as traitors and enemies of the people.
“We have no prisoners of war, only traitors of the motherland!” Stalin declared, giving the main idea behind Order No. 270. It was issued several months after Hitler’s army had entered the territory of the Soviet Union. Poorly-armed Soviet forces were suffering defeat after defeat against the superior army of the enemy. Stalin’s aim was to put the blame on someone for the losses and quickly dispel undesirable doubt as to his power and the victory of the Red Army.
First to bear the blame in Stalin’s order were the awarded Red Army commanders, Generals Nikolay Kirillov and Pavel Ponedelin, who had been taken prisoner by the Germans earlier that month. The Nazi’s used the fact of the war prisoners as propaganda. Both generals were photographed next to German officers and leaflets with those photos were scattered over the positions of Red Army troops.
Of course, there were those soldiers who displayed cowardice and had surrendered immediately, and others who had deserted and allied themselves with the enemy. But the plague of Order No. 270 was that it doomed anyone who was captured by the enemy, without any specific proof, investigation or consideration of circumstances. Under Stalin’s order, Soviet soldiers were to fight to the death, and those who were captured had either to escape or commit suicide. Those who didn’t have the inner strength to do so deserved a single verdict – execution. Families of commanders who were taken prisoners were subject to arrest and those of general soldiers were deprived of any state allowance and assistance.
According to Stalin, both Ponedelin and Kirillov were “fully capable of fighting their way back to their troops, but instead gave way to panic, turned into cowards and deserted to the enemy.” They were sentenced in absentia to execution by shooting. Ponedelin’s wife and father were sentenced to five years in camps as relatives of a traitor. Ponedelin and Kirillov remained in a fascist prison camp until the end of war. When they returned to their motherland, both were sent to Lefortovo prison in Moscow and executed for treason in 1950. It was noted that, just before the execution took place, Ponedelin said “I’m dying with peace, because after all it is my native Russian soil that will take in my ashes.” After Stalin’s death, cases of former prisoners of war were reviewed by a special committee who launched an investigation. In 1956, Nikolay Kirillov and Pavel Ponedelin were rehabilitated, but sadly too late to have any effect on their tragic fate, and that of thousands of other brave soldiers who had fallen victim to Order No. 270.
http://russiapedia.rt.com/on-this-day/august-16/

THE LUFTWAFFE SUPERIORITY
The Luftwaffe's task was to neutralize the Soviet Air Force. This was not achieved in the first days of operations, despite the Soviets having concentrated aircraft in huge groups on the permanent airfields rather than dispersing them on field landing strips, making them ideal targets. The Luftwaffe claimed to have destroyed 1,489 aircraft on the first day of operations.
Hermann Göring — Chief of the Luftwaffe — distrusted the reports and ordered the figure checked. Picking through the wreckages of Soviet airfields, the Luftwaffe's figures proved conservative, as over 2,000 destroyed Soviet aircraft were found. The Luftwaffe lost 35 aircraft on the first day of combat. The Germans claimed to have destroyed only 3,100 Soviet aircraft in the first three days. In fact Soviet losses were far higher: some 3,922 Soviet machines had been lost (according to Russian Historian Viktor Kulikov).
The Luftwaffe had achieved air superiority over all three sectors of the front, and would maintain it until the close of the year. The Luftwaffe could now devote large numbers of its Geschwader (see Luftwaffe Organization) to support the ground forces.

RUSSIAN AIR FORCE IN PITIFUL STATE
In the first two days of the invasion Germany destroyed 2,500 Soviet aircraft. Many were destroyed on the ground. Others were destroyed by poor tactics. Soviet bomber wings tried to attack without fighter escort. When threatened, bombers formed tight wedges and fighters formed defensive circles.
In April 1942, Lieutenant General Alexander Novikov took command of the Red Army Air Force. He ordered that all air power be consolidated, from the individual ground units to which it was connected, into one unified force. It was around this time as well that the factories that were moved east of the Ural Mountains began full production, pumping out roughly 1000 planes a month.
This reconstitution and increased production made the Soviet air force formidable again but so did tactical advancement. “Loose pairs” began to prevail over standard formations with planes working in tandem, or one plane covering while the other attacked. Bombers began to be escorted. Four bombers would be escorted by up to ten fighters. When fighters escorted ground attack craft they split into two groups. A group that flew with the formation and a group that flew high above and about half a mile (800M) ahead to scout for enemy patrols. By 1945 the Red Army Air Force had 17 air armies each with 2 fighter divisions, 2 fighter-bomber divisions, a night bomber regiment, a reconnaissance squadron and a liaison squadron. http://www.world-war-2-planes.com/soviet-aircraft.html

Late August 1941. Germans cross the Luga river. There seems to be a traffic jam
Posted by Dachau KZ at 12:34 AM