The first mention of the sub-camp Karlsfeld OT (Organization Todt) dates in the International Search Service in Arolsen as at  1 July 1944. Some barracks in the nearest area of the sub-camp Munich-Allach were separated and became then an independent camp under the designation 'OT-Camp Karlsfeld '. On July 17, 1944, SS-Hauptscharführer Johann Kastner took over the supervision of the sub-camp as Camp Leader. He remained in this position until the 20th August 1944, before moving to Kaufering, camp XI. His successor at Karlsfeld was SS-Hauptscharführer Leonhard Meyer, who was sent to Mühldorf in February 1945. The camp management of the last months until liberation is unknown.

The former prisoner Max Mannheimer recalls a commanding officer, Jäntzsch, who was characterized by particular cruelty when he turned a shepherd dog on prisoners. Albert Büchl was also a temporary commander. No details are known about the OT members who supervised the construction work of this subcamp. Like Munich-Allach (Rotschweige), Karlsfeld OT was a subcamp of the Allacher camp complex and belonged to the camp commander of the subcamps Allach (BMW).
Johann Kastner stated after the war that an average of 750 prisoners, mainly Jews from Romania and Hungary, were imprisoned in Karlsfeld. The majority of the prisoners worked on the repair of bomb damaged railway tracks at Karlsfeld station. Other detainees were used for bunker construction for BMW Komando Sager & Woerner, where the most difficult working conditions prevailed.  The prisoners of this 'death squad' had to leave the camp at five o'clock in the morning before the general roll-call had started, to the construction site, about  three to four kilometers away, and returned to the subcamp only after 7 pm. On the construction site, 50 kg heavy cement bags had to be carried at running pace (Laufschritt), gravel dug out  and the concrete mixer operated. Meyer, the camp leader, drove a vigorous and laboriously exhausting method with weakened prisoners.
Particularly feared among the prisoners was, besides camp leader Meyer, the camp Kapo Christoph Knoll, who particularly struck Jewish prisoners viciously. In addition to Kapos, a list of names dated 12th August 1944 mentions 22 functionaries. Camp Elder was Willi Schulz but only temporarily in this position. The prisoner Ernst Landau remembers the medical team of: Dr. Hermann Kessler, Dr. Imre Wirtmann, Dr. Johann Sander and Dr. Vilmos Barszony. Kapo in the Medical Center was Ludwig Meyerhofer. The camp-clerk  was Waldimir Pirnath and his deputy, abducted from Romania Dr. Elemer Deutsch. Work-assignment clerk was Zoltan Friedmann. Some of these mentioned were Jews. 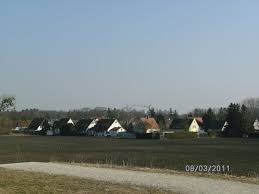 Karlsfeld, as it appears now

Especially in the working group Sager & Woerner, as well as in railway construction, prisoners died because of the severe working conditions and the mistreatment by the guards or Kapos. Between 18 September 1944 and 22 November 1944, 36 dead prisoners were returned from Karlsfeld to Dachau. The transfer lists also provides information that prisoners were transferred to the KZ-Dachau. In the autumn of 1944, While a 'selection' was taken place of sick and incapacitated inmates, who were deported to be exterminated at Auschwitz.. In February 1945 a further 120 to 150 prisoners were selected, whose whereabouts are unknown. Detailed information on the deaths of subcamp Karlsfeld is not available. In the camp Allach, Stefan Lason stated after the war that the deaths of the camp complex Allach were listed as being transferred to Dachau, and therefore the death rate was deliberately kept low. This coincides with the evaluation of the entry and exit book of the KZ-Dachau of March 1945, according to which less than 20 deaths were recorded.


On the 2th November 1944, 1046 female prisoners were detained at the subcamp in Karlsfeld as reported in the Dachau satellite commando listing. Two days later these women were transferred into the KZ-Ravensbrück. It remains unclear whether the women were actually in Karlsfeld, or whether this is a confusion with the camp Rotschweige, near Dachau. As to this  confusion, it was stated that women prisoners had already been accommodated there since 19 June 1944, and the females were not occupied again in Karlsfeld until 11 April 1945. On April 11, 1945, a transport with 191 women from the Natzweiler sub camp in Geislingen arrived in Karlsfeld. These female prisoners no longer came there to work at all.
Like others, the sub camp Allach (BMW), and Karlsfeld was the target of transporting prisoners from other evacuated camps in the last stages of the war. On the 20th April 1945 {Hitler's birthday, he must have been happy,sic] for example, the inmates of the subcamp Überlingen were relocated into the overcrowded camp Karlsfeld. On April 25, some of the prisoners were evacuated by rail in a southerly direction (without any particular destination) however, the transport was freed on 1 May in Staltach by American Troops.

Camp Leader Leonard Meyer was sentenced to life imprisonment in the context of the Dachau trials in 1947 and discharged on 16 February 1962. Johann Kastner was sentenced to death, but already released in 1950. Christopher Kmoll was sentenced to death in the Dachauer Hauptverfahren (Main Trials)  in 1945 and hanged in Landsberg on 29 May 1946. In 1975, the central office in Ludwigsburg determined offenses against the former Kapo Josef Zepf, which was discontinued in 1977.

The subcamp for men Kaufbeuren (Allgau), had an average of 300 prisoners, and was first mentioned on 23 May 1944. They came from Reichs Derutschland , Czechoslovakia, Poland, Yugoslavia, Greece, Italy, France, the Netherlands, Belgium, the Soviet Union and other countries. On 3 April 1945 there were 327 prisoners in the camp. It was probably im April 1945 that the camp was cleared, This meant that between the  26th and 29th April 1945 the number of prisoners was down to only 21. Most of the prisoners were evacuated by train in the direction of Munich-Allach in the middle of April 1945, and some of them were still forced to make their way through the Bavarian Oberland on the death march

The camp was located on the factory premises of a spinning mill, on the 4th floor, the complex was surrounded by a two meter high barbed wire fence, which  had been erected when the building was planned to keep prisoners. The detainees were accommodated in two hall-like rooms, which contained wooden sleeping bunks , three bunks high, for four prisoners in each. There was a ward with eight beds, which was cared for by a male  medical nurse, and also temporarily a prison physician. The functionary prisoners were all Reichsdeutsche (Germans), Camp Elder from September 1944 was the German-speaking Polish prisoner Kurt Brenner, who had been imprisoned at the KZ-Dachau since 1942. One of the Block Elders was Heinrich Baer. Some prisoners had previously been imprisoned in subcamp Allach or were sent back there after their term of  imprisonment in Kaufbeuren had been completed. Most of the prisoners were used by BMW and produced engine crank shafts for aircrafts during  day and night shifts. Approximately 30 prisoners also worked at the Swabian timber company in Kaufbeuren, while 20 prisoners were engaged in the kitchen and administration of the daily camp essentials..
Deaths were not known in the sub cmp Kaufbeuren. Baer, the former most prominent Block Elder, gave this statement after the war. Theft from comrades, however, were punished by beatings; These execution of the sentence was then reported to the main camp in Dachau. The camp leader was the SS-Untersturmführer Wilhelm Becker, who was born in Holshausen. Former prisoners did not charge him any offences
Near towards the end of the war in April 1945  made  it possible and easier for some detainees to flee from the camp with the help of foreign workers and civilians. For example, on April 18, 1945, eight prisoners were reported as absconded from  Kaufbeuren. In the course of the systematic verification of concentration camps as such, , the central office of the Landesjutiz administration from 1969 also determined the subcamp Kaufbeuren. Intentional detainee disturbances were not established.
The building in which the sub camp was located now serves again as a factory.