Ru sian reports will claim that this is the moment the red flag was hoisted above the Reichstag. Stalin will get his victory in time for May Day. On the 2nd May Russian photographers will take the famous photograph that demonstrates their control of the building and the capital . For now the bitter fighting continues. The battle of Berlin has cost Russian hundreds of thousands of lives. Ivan Kovchenko, a Russian soldier, summed up their experience: 'The battles for Berlin were characterized by particular toughness and resistance on the part of the Germans. Everything was on fire. We spared nothing, including ammunition, just to advance another few meters. It was even worse than Stalingrad.'

Heinrich Himmler arrives at Plön Castle in a convoy of Volkswagen and amoured personnel carriers . He has surrounded himself with a big team of bodyguards for fear hat Admiral Dönitz is planning to arrest him for negotiating withe allies. Dönitz is equally wary of Himmler. He arranges to greet him in his office. He has placed a pistol on his desk, hidden beneath a pile of papers with the safety catch off. As he later wrote in his memories, 'I had never done anything like this in my life before, but I did not know what the outcome of this meeting might be. In addition to the guards of Plön Castle, the Admiral had a detachment of U-boat sailors at the ready should Himmler's SS guard attack.
Himmler sits down opposite him and Dönitz passes him the telegram from Bormann. Himmler's face goes white. Then he stands up and says, 'Allow me to become the second man in your government.' Dönitz tells him that that won't be possible. Himmler, shocked by the news but relieved that he has not been arrested, takes his leave.
The new chancellor of Germany gets down to work. Given the impossibility of holding back the Russians, he decides his top priority: how to get as many Germans as possible into the British and American Zones.

AFTER APRIL 1945
The death of the Goebbels Children


As the Red Army closed in on Berlin, Joseph Goebbels and his wife Magda gathered their six children and made their way to the Führerbunker beneath the bombed-out Chancellery. Hitler and his new bride Eva Braun were already dead and the couple knew they were in the final moments of the Third Reich. They had already taken the decision to murder their five daughters and one son to save them from a world "without their Führer to lead and guide them".

The children were knocked out with morphine by an SS doctor and then had cyanide capsules crushed between their teeth. Afterwards Goebbels shot his wife and then himself.
The episode has long been seen as an example of the fanaticism of senior figures in the Nazi regime – but only limited amounts were known about the events leading up to the killings. Dining out in better times 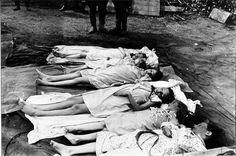 The Goebbels children as discovered by the Soviets

.
The Goebbels children as found by the Russians

They had already taken the decision to murder their five daughters and one son to save them from a world "without their Fuehrer to lead and guide them".
The children were knocked out with morphine by an SS doctor and then had cyanide capsules crushed between their teeth. Afterwards Goebbels shot his wife and then himself.
Picture: 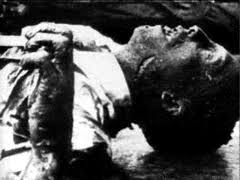 Goebbels head, only partially burnt, due to lack of petrol(there are no gunshot wounds visible)

The episode has long been seen as an example of the fanaticism of senior figures in the Nazi regime – but only limited amounts were known about the events leading up to the killings.
1959 which included a confession by Dr Helmut Kunz who helped with the killing of Helga, 12, Hildegard, 11, Helmut, nine, Holdine, eight, Hedwig, six and Heidrun, four – all names starting with H in honour of Hitler.In Kunz's testimony before the Hamm Upper State Court, he said: "Towards the end of April, Magda came up to me and said 'I need your help in the killing of the children'. I refused her, saying that was not my responsibility. I thought of my own two daughters who had been killed in an air raid by the Americans a few months previously
Picture: 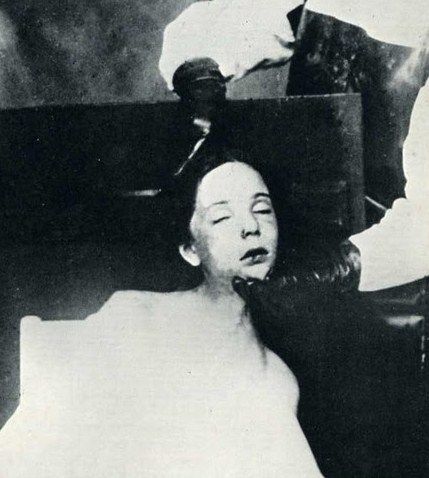 "But Magda Goebbels insisted and shortly afterwards declared to me that it was no longer a request for help but a direct order from Hitler."
Kunz was originally a dentist with the notorious SS panzer division Totenkopf – Death's Head – but became a trusted friend of Hitler after being wounded in the field and transferred to a desk job in the Reich's Chancellery.
He told the court he escaped the bunker but was tracked down by Magda hours later who said he must return or "you will be a dead man".On the evening of May 1 he was forced to carry out his grim duty
."The children were all in one room," he recalled. "But they were not asleep. 'Have no fear,' said Magda Goebbels. 'The doctor here is going to give you an injection of the sort that all children and soldiers get'.
"She left the room. I injected them with morphine – the eldest daughters first, then the son, then the other daughters. It took around ten minutes."When the children were off, Magda Goebbels went into the room, the cyanide capsules in her hand. She was in there for several minutes, then stepped out, crying, saying 'Doctor, I cannot do it. You must'."I answered immediately: 'No, I cannot'. Then she cried: 'Well, if you cannot do it, then get Stumpfegger'.
Picture 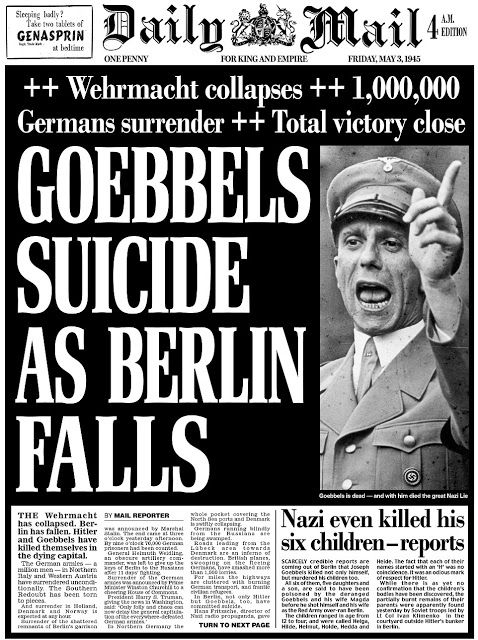 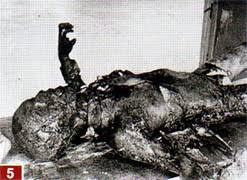 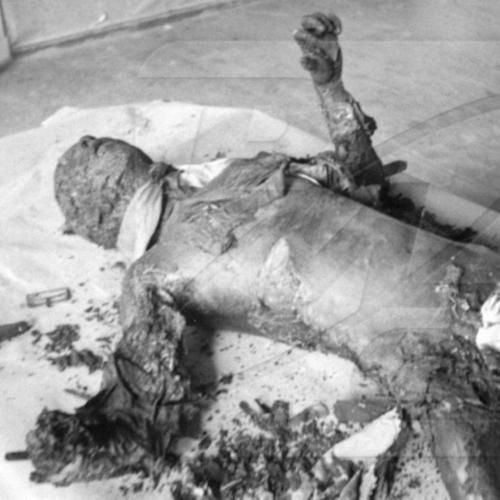 Goebbels - probably his wife Magda on the stretcher

Dr Ludwig Stumpfegger, a physician close to Heinrich Himmler, the head of the SS, was the one who would eventually murder the children.After the killing, Kunz left the bunker and was later arrested by the Soviets and flown to Moscow where he was convicted of membership of the SS and the Nazi Party.In 1959, back in Germany, two judges, both of them former Nazi party members, stopped a trial against Kunz saying he had "no choice" but to obey orders.He died in his bed in 1976.
The ashes of the Goebbels children were scattered, along with those of their parents and the Fuehrer she thought they could not live without, by the Red Army in a river near Berlin.Researcher Mr Wogersien said the papers had given the world a dramatic new insight into the last moments of Goebbels and his family and also post-war justice."They throw light on the mild punishments of Nazis at the time and how the law was opaque, with a judiciary composed of many former Nazi judges," said Mr Wogersien. "They also show how a mother became so corrupted by Nazism that she would allow this to happen to innocent children. 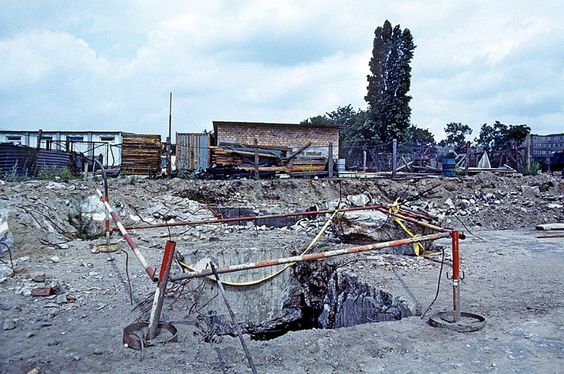 Ruins of Hitler's bunker, the hole in the center leads to the actual airshaft

Any Typing errors are that of my own
Herbert Stolpmann, December 2017