THE MARRIAGE
Eva Braun and Adolf Hitler emerge from their rooms, her arm through his. She is in her black dress. It is a simple, elegant dress, decorated around the neck with sequins. Black is the traditional color of German wedding dresses. (This may have been then, the color preferred now is pure white and more fashionable,sic) As a girl. dreaming of marriage, Eva has photographed dressing up in her grandmother's black lace wedding dress. Hitler has not changed his clothes and is wearing his usual black trousers and the grey military jacket. Walther Wagner, the civil magistrate, greets them nervously. The couple take their seats on one side of the empty map table, flanked by their witnesses, Wagner sits opposite.

The two-page marriage certificate is laid out on the map table in the Führerbunker conference room. Wagner reads out the preliminary questions about the couple and fills in the information with a thick blue-ink pen. Hitler omits the names of his parents and gives his address as the Reich Chancellery. Braun, apparently flustered, gives two different street numbers- 8 and 12- as the address on Wasserstrasse (12 is correct)
Joseph Goebbels and Martin Bormann give their details as witnesses. The bride and groom are then asked to confirm that they are of pure Aryan descent and free of any hereditary diseases that would exclude them from marriage.'

Hitler's descent, and in particular the absence of any hereditary diseases, was in fact very much in doubt. His paternal grandmother was married at the time of his father's birth and the identity of his paternal grandfather was never confirmed, but it was widely believed to be his foster father, Johann Nepomuk Hiedler, whose surname he took. The change of spelling to Hitler was thanks to a phonetic transcription by the pastor of Döllersheim who kept the register of births and deaths. Johann Nepomuk Hiedler was also the grandfather of Hitler's mother, Klara, so that Hitler's parents seem to have been uncle and niece. The family was certainly beset with health issues. Adolf was one of only two of their six children to survive. The other, his sister Paula, had a learning disability.
Hitler himself is believed to nave had two forms of genital abnormality: An undescended testicle and a rare condition called penile hypospadias in which the urethra opens on the underside of the penis or, in some cases, on the perineum.

Having received satisfactory responses, Walther Wagner then reads out the marriage vows: Mein Führer, are you willing to take Fräulein Eva Braun as your wife? If you are, answer, 'I do.' Adolf Hitler repeats, 'I do.'  'Fräulein Eva Brown, are you willing to take our Führer, Adolf Hitler as your husband? If you are, answer, 'I do'. Eva Braun repeats: 'I do.' Hitler places a gold ring on Eva's finger, and she places one on him. The rings have been taken from bodies of murdered Gestapo prisoners. The couple discover the rings( hastily obtained from the Gestapo treasury) are too big.
Wagner then declares 'this marriage is legal before the law.' When he drew up the document Wagner expected the ceremony would be completed before midnight and dated it '28April 1945'. He now hand-writes '29' on top of the '28'. Then he passes the pen to Hitler as the first named and the first to sign.
The two words 'Adolf' and 'Hitler', side by side and far apart, both slope steeply downward.  Adolf is diminished to three zigzag lines with a cross. representing the horizontal of the 'f', on the lower line. 'Hitler' is more ornate, beginning with a complex loop, but the following letters are lightly compacted.
Eva Braun's signature is in tidy schoolgirl italics. She automatically begins her surname with the letter B, then crosses it out and signs, 'Eva Hitler, geb (nee) Braun'. Goebbels and Bormann then sign as official witnesses.

Landing safely at Rechlin airfield, 150 km north of Berlin , an emotional Hanna Reitsch is exhilarated by the successful flight. Robert Ritter von Greim, pale with pain, immediately addresses the handful of staff who remain at the airfield and gives the order for all aircraft to support the relief of Berlin. His words are pointless. The airport has been devastated by Allied bombing. The few planes that are left will make no difference.

After the marriage ceremony in the Führerbunker, the couple go back to their private rooms for champagne, tea and sandwiches (Butterbrot) with their senior staff. Hitler goes briefly to check on Traudl Junge's progress with typing the testaments, then joins the party. He turns down the champagne but, most unusually, as he normally teetotal, he accepts a small glass of Hungarian wine, sweetened with sugar. Walther Wagner stays for 20 minutes. He has a glass of champagne and a liverwurst sausage, and then, sets off back to the Home Guard post in a wine cellar oin Unter den Linden. He will be shot in the head two days later, caught in the crossfire of a street battle.

Jitler's valet, Heinz Linge, is struck by Eva's composure. He congratulates her as 'Frau Hitler' and her eyes light up. For a moment she lays her hand on his forearm and smiles.
Hitler's mind is still on his political testament, he sends Martin Bormann and Joseph Goebbels away from the party, at different moments, to add more names to the list of appointments which Traudl Junge is still typing. Junge is tired and very frustrated by the constant changes.

Three hundred kilometers away, in the police station in Lübeck near the Baltic coast, Heinrich Himmler is poring over over astrological charts with the astrologer Walther Wulff and Walter Schellenberg, the SS head of foreign intelligence. As soon  as Himmler heard that news his attempts to start peace negotiation with the Allies had become public, he summoned Schellenberg, who had been involved in setting up the meetings with the Swedish Count Folke Bernadotte.
As Schellenberg later wrote, I realized that my position with Himmler would be so difficult that I should have to face the fact that I might be liquidated.'
In order to protect himself, Schellenberg decided to make Walter Wulff with him to meet Himmler. He knew that the deposed SS Chief would never resist having his horoscope read and hoped that Wulff would be able to keep Himmler calm.
Himmler is chewing on a fat cigar. He smells strongly of brandy and is sweating sand shaking close to tears. He is terrified that he could be arrested or simply shot on Hitler's orders at any moment. Schellenberg and Wulff are equally tense. Wulff has spent time imprisoned by the Gestapo. He has agreed to help Schellenberg, but is anxious not to aggravate the SS Chief with his predictions. As agreed with Schellenberg in advance, Wulff tells Himmler that the stars suggest the best course of action is to send Schellenberg back to Count Bernadotte in Sweden. Schellenberg is committed to trying to rescue the talks about talks. Schellenberg, the charts, Himmler finally agrees, show that Schellenberg can discuss the ending of the German occupation of Scandinavia with Bernadotte. 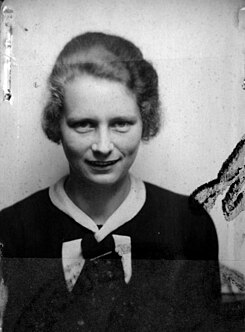 Himmler;s biggest concern is what the charts have to say about his personal future and that of his mistress, Hedwig Potthas, and his children. He has no idea what to do and keeps asking Wulff whether he should kill himself, or whether he could have a future. He asks Wulff to explain how save various countries are, in astrological terms. Should he flee, for example, to Czechoslovakia?  Wulff advises that the charts aren't looking good for Czechoslovakia. It is the position of the stars, rather than the position of the Russian Army approaching the Czech capital that concerns Himmler. He eventually decides that he will remain in Lübeck but that Schellenberg should travel to Denmark rather than Sweden.
With enormous relief Schellenberg rushes off to pack.

At Rechlin airfield, Hanna Reitsch takes the controls of a tiny open-top aircraft and Ritter von Greim, again, squashes in besides her as they set off for Lübeck. They are now focused on the second part of the mission: To capture Heinrich Himmler. They have decided to head to Admiral Dönitz's headquarters in the hope that he will have information on Himmler's whereabouts

In the Führerbunker the celebrations continues: Adolf Hitler sits quietly while Eva knocks back the champagne. Generals Krebs and Burdorf are on cognac.

Flying from Rechlin to Lübeck on the Baltic in a little two-seater, Hanna Reitsch and Luftwaffe Chief Greim are under attack from Russian fighter planes which have control of the skies. Reitsch, who is one of the most skilled pilots of her generation, manages to dodge all attacks.

In the Führerbunker Traudl Junge finally finishes typing Hitler's testaments. The copies are taken through to the conference room for the witnesses to sign. Goebbels, Bormann and the Generals Burgdorf and Krebs sign the three copies of the political testament as witnesses and Hitler's Luftwaffe adjutant Nicolas von Below signs the will. Junge thinks how the bunker light makes everyone look grey and exhausted as she returns to her desk in the common room to put the papers in order.
Von Below has been with Hitler throughout the war, representing the Luftwaffe Commander Hermann Göring. He is honored to sign Hitler's will. The last few days have been particularly tense as he has had to maneuver carefully to distance himself from his disgraced boss. Von Below is longing to find a way to leave the bunker. Only three weeks ago he traveled to the Baltic coast to say goodbye to his pregnant wife and three children. He had traveled back to Berlin in beautiful sunshine with great reluctance. He believes it is unlikely that he will leave the capital alive.

ON BEHALF OF MY CHILDREN, WHO ARE TOO YOUNG TO SPEAK FOR THEMSELVES, BUT WHO WOULD UNRESERVEDLY AGREE WITH THIS DECISION IF THEY WERE OLD ENOUGH, I EXPRESS AN UNALTERABLE RESOLUTION NOT TO LEAVE THE REICH CAPITAL... 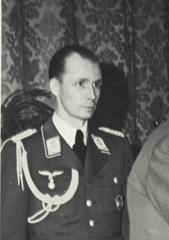 von Below as Luftwaffe adjutant to Adolf Hitler