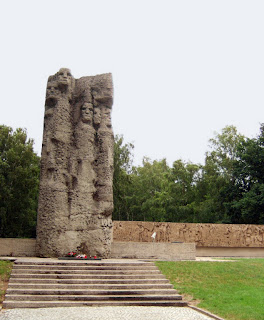 THE GUARDS AND PROTECTION TEAMS
The established Old Camp (Altes Lager) (1939-1942) was protected by a high barbed-wire fence and four guard towers, from which strong reflectors (search lights) at night lit the camp terrain. The guard towers were manned by armed guards.  the main gate, also called the 'Gate of Death' led Into the prisoner area of the camp. In the centre part, a second fence with a gate separated the prisoners accommodation from the camp hospital and workshops. The site of the 'New Camp' (Neues Lager) built from 1942 until 1945 was surrounded by two rows of barbed wire fences. The outer fence was electrified with 360 volts. To fully isolate the Jewish prisoners further, their camp area was surrounded by another barbed wire enclosure, connected to a high voltage electrical system. The on duty SS Totenkopf-Sturmbann of Stutthof concentration camp consisted of three companies, which in turn made up of two Platoons. From 1942 to 1943 each company had about 150 men, that is, theoretically every tenth inmate was guarded by one SS man. In practice, however, the ratio was one to 20 or 30. In early 1942, the authorized strength was three officers, and 432 SS men, but in fact there were only 140 SS men on the camp premises.
After Stutthof had become a concentration camp, there were constant changes and fluctuation in the make-up of the guard contingent. By the end of 1942, it consisted solely of former Polish citizens of German ancestry (ethnic German) German citizen of the Free City of Danzig and some Reich Germans. During 1943 ethnic German from Romania, Croatia, Hungary, Lithuania and Slovakia, as well as German nationals originally from Germany and Austria came to Stutthof. Also, Ukrainians, reassigned from the Buchenwald concentration camp, did service by 1943 in Stutthof. They were trained in the SS Trawniki training camp and had previously been used mostly in the extermination camps of Treblinka and Sobibor. There were also former Latvian policemen who came to escort inmate transports into the camp, but often returned to their original assignments.
On 15 June 1944, the first of 500 Wehrmacht soldiers of the Army Section Stettin arrived in the Stutthof concentration camp to reinforce the guards, because now transports of Jews from the Baltic countries and the Auschwitz concentration camp were expected to arrive in Stutthof.  On 29 June 1944, the Wehrmacht training battalion under command of SS-Hauptsturmführer Richard Reddig was responsible for re-forming the newcomers into four companies with 431 non-commissioned officers and soldiers. On July 6, 1944 it was renamed 'SS Guard Battalion II-KL Stutthof'. The soldiers were transferred into the Waffen-SS and fitted out with SS uniforms. With this transformation another four security companies had thus been established. The maximum Staff Complement of the Stutthof concentration camp hereby consisted of 1,100 SS men, of whom were 590-900 to be guards.
On 27 September 1942 in accordance with Himmler's order of 15 May 1942 the use of service dogs (Diensthunde) in concentration camps was raised., the first eight shepherd dogs with their handlers arrived in Stutthof. In June 1943, the canine unit consisted of 20 and on January 12, 1945 of 18 dogs. The animals were used as detection dogs in the hunt for fugitive prisoners.

The final decision on the approval of Stutthof as Konzentrazionlager Himmler's visit was made after November 23, 1941, the official creation of KL issued on February 20, 1942, when it ordered the camp belonging to the Gdansk police facility. In practice, the dependence of the camp authorities has not changed almost at all, because the camp is still subject to SS-Gruppenführerowi Richard Hildebrandt, the Higher SS and Police Leader in the District of the Gdańsk-West Prussia. In 1942, there were organizational changes due to the affiliation of the camp and its involvement in the extermination policies and the system of exploitation of the labour force of the prisoners in concentration camps, resulting in a radical change in the national composition of the Stutthof camp. From 1942 to mid-1944, the SS sent prisoners from concentration camps Buchenwald, Dachau, Neuengamme, Mauthausen,  Sachsenhausen and Flossenbürg to Stutthof. Among them were at the beginning  craftsmen such as carpenters, roofers and carpenters, who were initially employed in the construction of the new camp. The prisoners were of Polish, German, Czech, Dutch, Belgians, French, Norwegian origin, and also Jews. Among the Germans, the 'criminal' prisoners (BV), predominated, which immediately took over auxiliary functions in the guarding functions. In addition ten nurses arrived from the Dachau in two transports on 22 April and on 23 September 1942.
The transports that came from Denmark, Norway and Finland, and Lithuania and Latvia from 1942 to 1944, bear witness to the brutal fight against the Resistance in occupied countries. In April 1943, so-called Honour Prisoners were deported to the Stutthof concentration camp. Representatives of the Lithuanian and Latvian intelligentsia, university professors, members of parliament, engineers, priests,and doctors. More and more members of the Latvian resistance movement came in the second half of 1944 into the camp. In the camp records 3,000 Latvians are listed. Among the prisoners that were detained on 14 September in the concentration camp, was among others the son of the President of Latvia, Professer Konstantin Cakste.

In the years 1942 to 1944 Poles were deported to Stutthof from other regions. On May 22, 1942 for the first time 51 prisoners came from the Warsaw Pawiak-Prison, among them eleven Jews from the Warsaw ghetto. Further 859 prisoners from Pawiak arrived on the 25th of May 1944. Most were political prisoners, members of underground organizations that operated in Warsaw. Late August and September 1944 arrived the largest group of prisoners from Warsaw. These were from the transit camp of Pruszkow, where the Warsaw insurgents had been kept after the capitulation in October 1944. The SS transferred a total of 4,432 civilians of them, as well as a group of female couriers of the Home Army. Also from the area around ​ ​Bialystok in the course of anti-partisan operations one transports with Polish citizens arrived. Due to their affiliation or assistance towards partisan units or for sympathies for them about 2,500 Polish peasants and Belarusian's mainly farmers and residents in rural areas in the eastern  Polish territories during 1943 to 1944 were imprisoned in the concentration camp Stutthof.
Since the end of 1943 a major transport arrived with Jewish women. In November, 300 Jews were registered from the ghetto of Bialstysok. A new capital in the history of the camp of Stutthof began with the arrival of a transport of 2,502 Hungarian Jews from the Auschwitz concentration camp on 29 June 1944. A total of 23,566 prisoners came from late June to the 28th October 1944 in eleven transports from the Auschwitz camp complex, of which 21,817 were women. In addition to the Jewish women from Hungary also Jewesses from the Czech Republic, Slovakia, Germany, the Netherlands, Latvia, Luxembourg, Italy and Romania were among them. Most of the prisoners who were deported from the camp of Auschwitz to Stutthof, were Polish Jews from the ghettos of the General Government had been kept, and the last occupants at the end of August 1944 came from the liquidated ghetto of the Lodz ghetto. But even Jews from the Baltic countries were deported to Stutthof. The retreat of the eastern front in the second half of 1944 forced the Germans to dissolve the ghettos and camps in Lithuania, Latvia and Estonia, and to send the prisoners on evacuation transports. The obvious closest camp was Stutthof. The number of these transports began with 4,785 Lithuanian Jews, mainly women with young children. Their arrival was registered on 12th and 16th of July 1944. The security police in Kaunas and Riga sent a total of 16 transports with 25,043 Jewish prisoners to Stutthof. Here, too, were 16,123 women with them, female prisoners in the camp were now in the majority. In addition to Lithuanian and Latvian Jews as well as other Jews from Poland, Germany, Hungary, Czech, Slovakia, Austria, Romania, Russia and Italy arrived with these transports, which consisted also of prisoners of other nationalities, such as 34 French Jews from Drancy, which were included by the security police in Reval onto a transport of Polish prisoners on the 1st September 1944 that arrived at Stutthof. Despite the gaps in the camp documentation for the second half of 1944, it is to assume that there were at that time about 49,000 Jewish prisoners in the concentration camp. These admission of numerous Jews led to changes in the mix of the existing inmate population.

In June 1940, it had been for the first time that women were in the majority of the total camp inmates.  Many women were among the relatives of the Pomeranian resistance movement including some transports from Warsaw who were arrested between 1941 and 1944 and sent to Stutthof.  Even with transports from Denmark, Norway and the Baltic countries, women came for one reason or other into this camp. Russians, Poles, Ukrainians  and Frenchwomen were also deported to the labour education camp  [Arbeitserziehungslager, which in fact was hard labour to show them what physical work was really like. HKS] in October 1941. To this category of prisoners were also many forced labourers (Zwangsarbeiter) from different nations from the Gau Danzig-West Prussia, who allegedly refused to work for the Third Reich, had been away from their jobs, had performed their work badly, or were under  suspiciousion of sabotage. After 56 days, this category of detainees were released. Many, however, died before that.[Forced  labour played an important role in the Nazi regime’s Jewish policy as well as for the economy of the concentration camps. Forced labour became particularly important following the outbreak of World War II, when the Nazi war economy demanded an enormous effort. In connection with the ’Final Solution’, the Jews’ role as workers diminished as the extermination process was escalated. This was particularly apparent as far as the Polish Jews were concerned. A morbid form of forced labour was instituted in 1941, according to which Jews should be “worked to death.sic]
From 1942 until January 1945 decommissioned Soviet prisoners, especially political commissars, party officials, Communists and Jews were transported to Stutthof as well from other prisoner of war camps. Often after the acceptance of these prisoners, executions in the camp grounds, mostly on prisoners of Jewish origin took place.  On October 13, 1944, 109 men from the French SS Volunteer Assault Brigade Charlemagne, which was re-named at the turn of 1944/45, into the SS Division Charlemagne, and taken to Stutthof. They wore the SS uniform with the tricolour armband. To the other prisoners they maintained they came into the camp because they had refused to fight on the side of Germany on the Western Front.  In fact, they had committed criminal offences, but only in a few cases had they been convicted of desertion by the SS and sentenced during court martial of SS and Police Courts in Danzig.