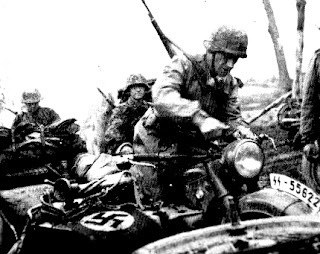 A close-up of a Totenkopf motorcycle. Note the swastika on the side car, used for recognition by the Luftwaffe 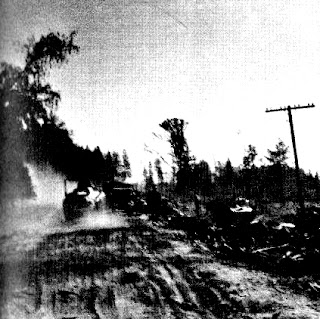 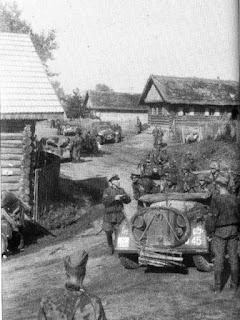 German vehicles speed along the initial phase of Operation Barbarossa. Later in the campaign roads were to become all but impossible due to rain then snow 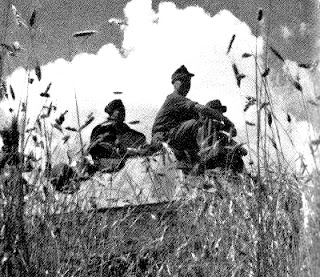 Waffen-SS troops scan the skyline from an armoured car. Armoured cars were used for reconnaissance and intelligence gathering, scouting ahead of mechanical units to assess enemy strength and location, Their primary role was tp observe rather than fight enemy units, although they were expected to fight if endangered by the Soviets. 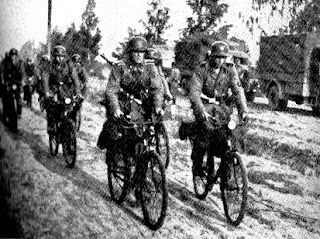 The German Army used several million bicycles during the Second World War but they were better suited to good roads in western Europe than the rough tracks in Russia. 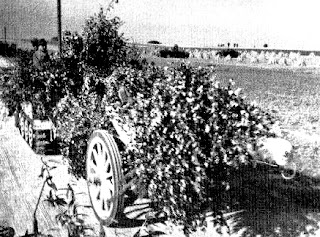 Although an excellent weapon the 17cm K18 MrsLaf was expensive to produce., difficult to manoeuvre and very slow to set up and take down. Many very lost when their crews destroyed them to avoid capture by the advancing Soviets. 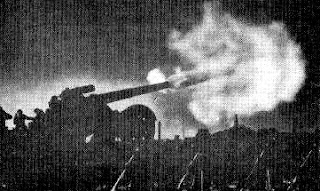 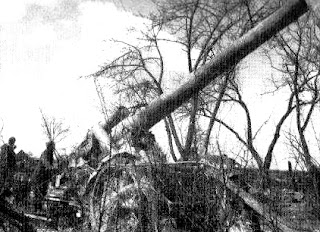 The 17cm K18 in MrsLaf in action by day and night had a maximum range of 18 miles and was used to provide lond range counter battery support. 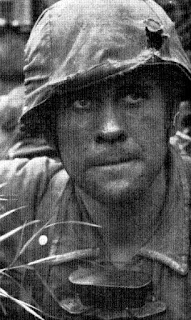 A German troop reflects the battle during the lull in the fighting. Their hopes tha Barbarossa would all be over by Christma was shattered by the stall in the advance of Army Group Centre outside the gates of Moscow in December 1941. 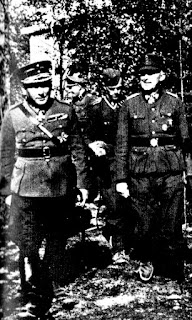 General Sillasvuo was the Commander of the III Finish Army which included the Waffen-SS 'Nord Division'. The Fins enthusiastically joined in the attack on Russia to get their revenge for the winter of 1939-40. This saw the Red Army humiliated but through sheer numbers overrun the country 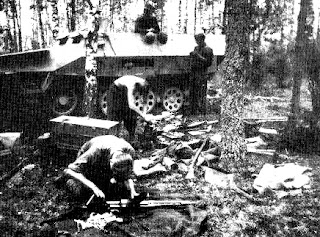 Waffen-SS engineers carry out vital repairs to an Sd.Kfz 251 half-track. The fighting, weather and the large distances involved in Russia meant that vehicles were in constant need of servicing and repair. 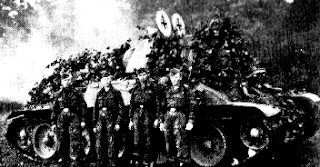 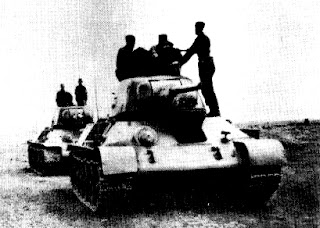 The Germans were quick to utilise captured T34 tanks, marking them with German insignia. When introduced in 1940 it was the most advanced tank design in the world. Although by 1943 outclassed by other tanks such as the German Panther, it remained a formidable opponent. 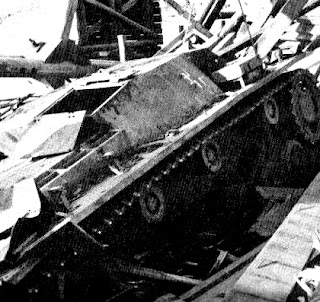 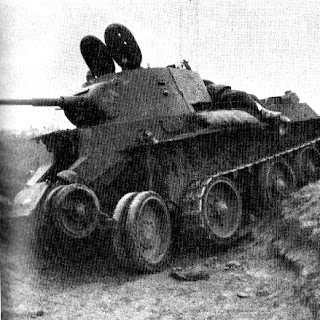 A knocked out Russian BT-7 tank. Part of the mainstay with the T34 of the Soviet army. The T34 was more than equal to the German Panzers at the beginning of the campaign and was only later outclassed by the German Panzer VI-Tiger and Panther. 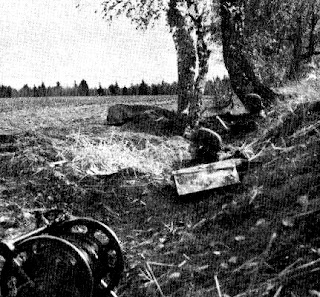 German soldiers dig in at Borodina, Russia. The vast distances involved across the 1,800 mile front posed huge logistical problems to both Wehrmacht and the Waffen-SS. 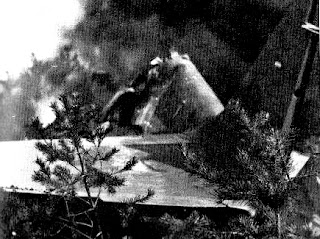 A shot down Russian Rata aircraft. In the opening days of the campaign much of the Soviet airforce was destroyed on the ground before it could take-off, with over 2,000 planes destroyed on the first day alone. 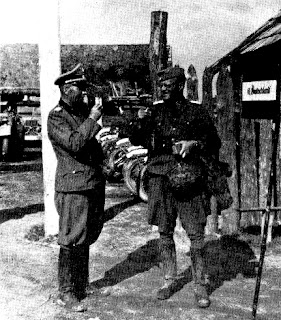 Oberführer Bittrich, commander of the 2nd SS-Panzer Division, 'Das Reich', enjoys a cigarette with a soldier outside his regimental HQ in the summer 1941. 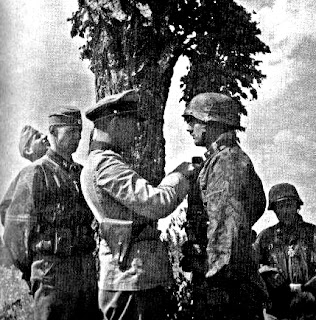 Members of the reconnaissance Battalion 'Das Reich' are awarded the Iron Cross for bravery during the opening months of the campaign. 25th July 1941. 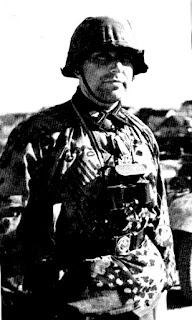 An SS-Grenadier proudly displays his Eiserne Kreuz 2nd class(or Iron Cross) for bravery on the battlefield, 1941. Over four and a half million Iron Crosses were awarded in World War II. 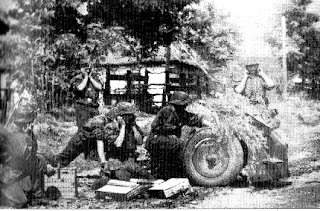 A 7.5 cm 'Leichtes Infantriegeschütz (7.5 cm le.IG 18) light infantry support gun is brought up to support the troops. It had a rate of fire of 8 - 12 rounds per minute and a range of 3,500 metres. The crew put the fingers in their ears to reduce the noise. 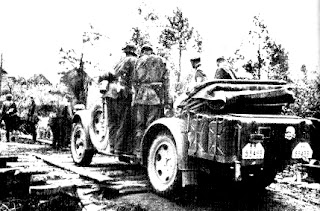 'Totenkopf' troops crossing a makeshift bridge on a Horch 108 troop carrier. Note: The Death Head insignia on the rear. 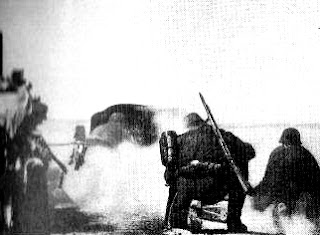 Waffen-SS troops using an anti tank gun against the Soviet T-34 Tank.Tthe T-34 was heavily armoured and it required a direct hit to its tracks or at very close range to disable it. 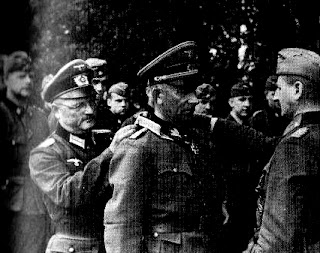 Paul 'Papa' Hauser, Lieutenant-General of the 2nd SS-Division 'Das Reich', receives the Knights Cross to the Iron Cross from General of the Panzer Troops, Heinrich von Vietinghof-Scheel. He was highly respected by his troops and known as the 'father' of the Waffen-SS. 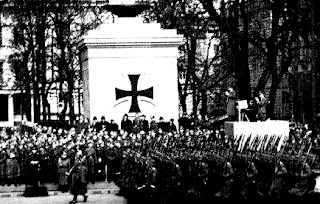 In Germany a march past of the Leibstandarte on Heldengedenktag (Heroes Day). It was previously known as the Volkstarauertag or Commemoration Day , a national day of mourning for all those who had been killed in battle but the Nazis turned it into their day to celebrate the heroism of their struggle, not the sacrifice of German troops. 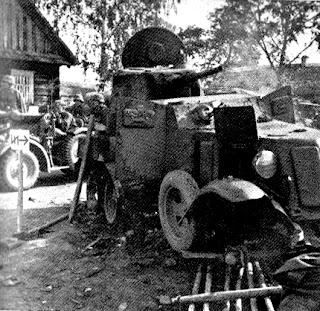 'Army Group North' advanced through the Baltic States and on to Leningrad, accompanied  by the 'Totenkopf','Polizei','Das Reich', 'Leibstandarte'.Tthe 'Wiking' were with Army Group South and travelled towards the Ukraine and Kiew. 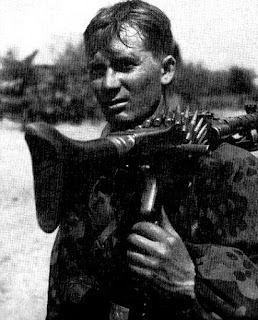 A Wafffen-SS soldier with an MG-34 machine gun, which was replaced with the MG42 a more robust and reliable weapon and fired over 1000 rounds a minute. 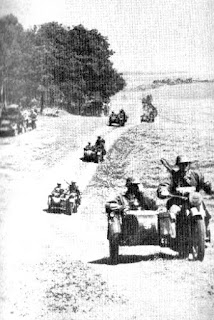 Motorcycles of the 'Wiking Division' scout ahead of the Panzers. The speed and ferocity of the German attack coughs the Russians completely by surprise.