Barbarossa The Waffen SS on the Eastern Front Part 6

Barbarossa The Waffen SS on the Eastern Front Part 8 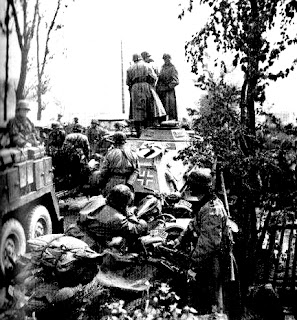 Totenkopf troops rest in a copse during a lill in the fighting. September 1941. They were attached to Army Group North who advanced through the Baltic States on to Leningrad 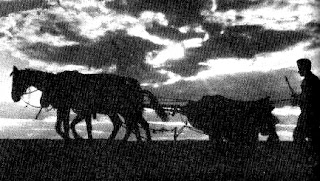 Supplies are brought to the front by horses at dusk. Infantry and horse drawn artillery still formed the bulk of three German army groups attacking Russia. There were 750,000 horses in the German Army at the start of Barbarossa. 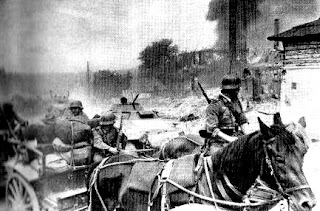 Waffen-SS from the Leibstandarte Division watches a village burn. As the campaign progressed many Soviet fighters rather than surrender went into hiding and formed partisan units who operated behind German lines. (Note; These are Wehrmacht soldiers, see eagle insignia on the breast, sic) 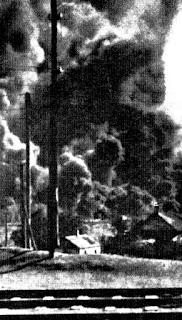 Mariupol burns. The Germans were to lose control of the city two years later as they retreated from the advancing Soviet army. 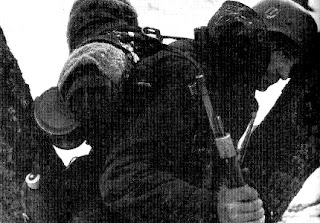 By late 1941 the Russians winter ferocity of the fighting and the large distances involved in Barbarossa were beginning to affect morale among the German troops who realised that they were in for a long battle of attrition. 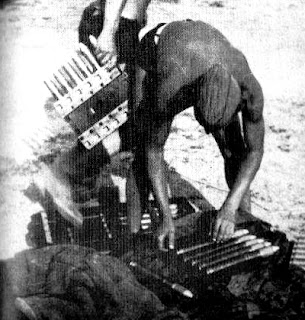 German soldier sort out ammunition for their unit. the sheer speed of the advance during the early months of Barbarossa meant that providing enough ammunition for the troops was a costant logistical challenge. 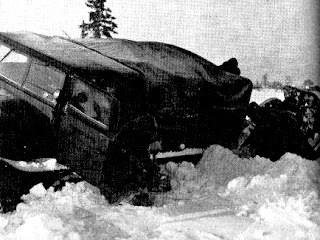 A gun tractor with light field howitzer gets stuck in a snow drift. The Germans often had to resort to horses to pull their equipment out of deep snow as animals proved much more suited to the freezung temperatures.


Below:
Waffen-SS troops put togetjer a 'Panzer Cocktail', an improvised Molotov cocktail used against Russian T34 tanks. Due to its sloping armour the German 3.7cm anti tank gun proved ineffective against it. 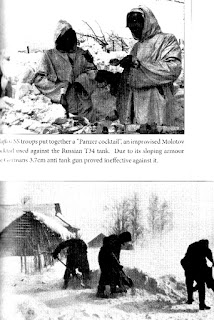 German troops shovel snow to keep their lines of communication open. It often proved a futile task and during the winter 1941 some Units were cut off for weeks. 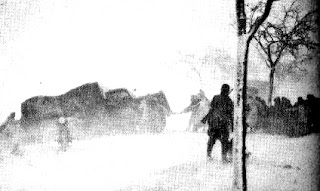 German soldiers try to pull a lorry of the snow. The sub zero temperatures which often reached minus 20 degree Fahrenheit and deep snow suited the Russians who were used to such conditions and were fighting on home territory. 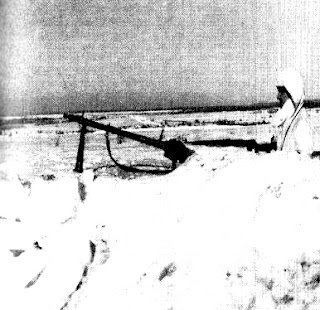 Trapped in the Demyansk pocket was the SS Totenkopf Division, part of 100,000 men surrounded by the Soviets. 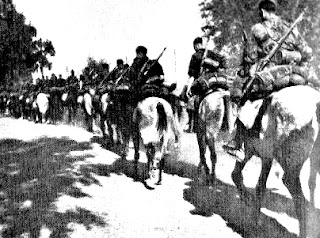 The 8th SS-Calvary Division was named after Florian Geyer, a sixteenth century nobleman who was famous for leading peasants during the German Peasant War. 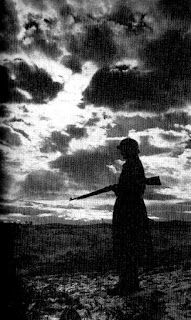 A lone sentry stands guard on Hill 252 near Zdenac. German forces were frequently subjected to attack by Russian partisans who operated behind enemy lines. 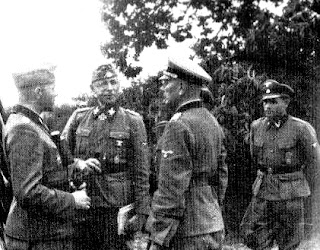 The Leibstandarte fought alondside 'Das Reich' under the command of Paul 'Papa' Hausser, third from right, who was known as the father of the Waffen-SS. For his services in Russia he was awarded the Knights Cross to the Iron Cross with Oak Lwaves. 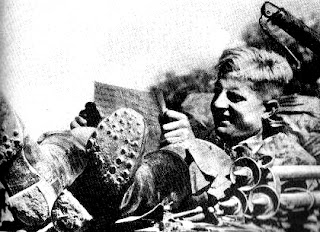 The 'Feldpost' or field post with news from Germaany was greatly looked forward to by the front line troops. It was subject to heavy censorship, particulary during retreat from Russia in latter years of the war. 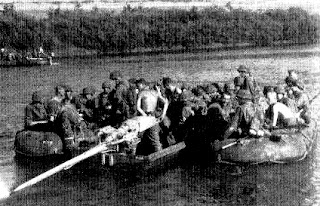 The German Army also made regular use of inflatable boats or dinghys during operation Barbarossa. While they were capable of transporting men quickly across water, they were particularly vulnerable to enemy attack 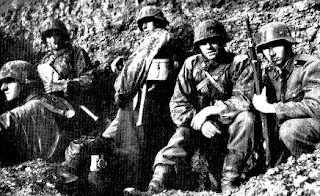 Waffen-SS men relax prior to battle. The wore a wide range of uniforms from the 'fedgrau' or field grey similar to the regular army to the mottled camouflage which was their hallmark. 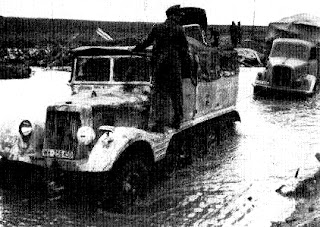 Lorries make their way gingerly through swollen river after the big thaw following the Soviet winter of 1941/42. The thaw could turn a ford into a raging torrent. 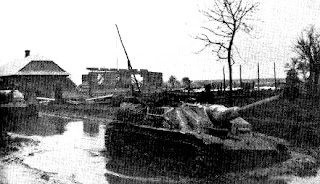 A Sttug III tank makes its way upstream. Tanks coped better with the adverse conditions than many other types of armoured military vehicles, but often proved difficult to repar when they did break down. 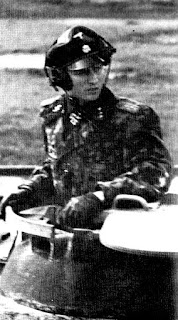 A Tiger tank commander with the third SS Division Totenkopf. The division suffered heavy casulties during the battle of Demlansk Pocket but went on to fight with distinction at the battle of Kursk in 1943 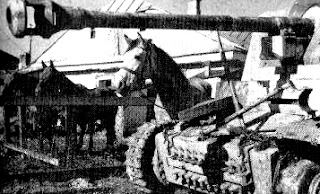 Horses and tanks both played a pivotal role in the Operation Barbarossa. While the Panzer tanks were mechanically complex and prone to breakdown, many horses were simply worked until they dropped from exhaustion, hunger or disease. 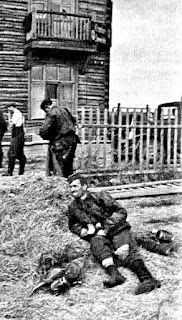 A wounded soldier from the 4th SS division Polizei, The division was officially formed in 1942 from its origins as a German Police Organisation, They took part i heavy fighting between January and March which resulted in the destruction of the Soviet 2nd Shock Army. 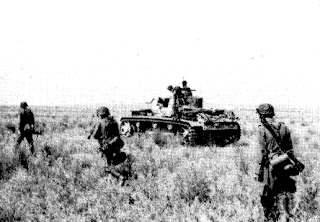 Waffen-SS forces advance as part of Operation Blue in 1942, Overstretched by the vast area they had  overrun, German forces would go on to fight an epic battle at Stalingrad which resulted in the destruction of the Sixth  Army. 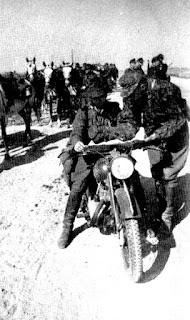 A Waffen-SS motorcyclist stops to get his bearings, June 1942. Mtorcyclists were crucial to the German offensive being more mobile and able to cover large distances much more quickly than other motorised vehicles. 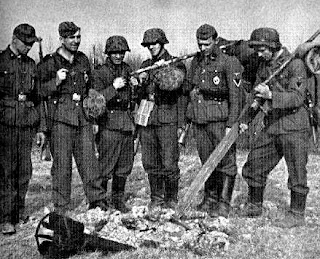 Waffen-Ss troops inspect an unexploded rocket. The Soviet Katyusha rocket launcher took a heavy toll of both German troops and equipment. Compared to other artillery, multiple rocket launchers could deliver a devastating amount of explosives to a target area quickly. However, they had lower accuracy and required a longer time to reload than conventional artillery. 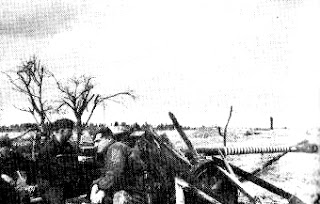 A German Panzerabwehrkanone 7.5 cm anti-tank gun with 22 rings of hits to its credit. This versatile gun with a range of over 700 metres was the backbone of German anti-tank artillery during Operation Barbarossa, but it was heavy and often got bogged down in the mud. 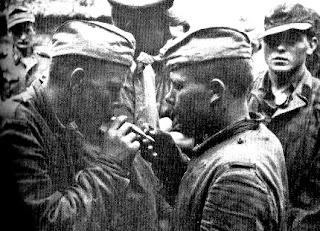 A Soviet prisoner with a cigarette offers another a light watched by guards in a German propaganda photograph. News of the barbaric treatment of Soviet p[prisoners of war, who the Waffen-SS claimed had not signed the Geneva Convention (which is a fact,sic.) soon spread among the Soviet Army. (The treatment of German SS-prisoners, or Wehrmacht, in Soviet hands was not any better,sic) 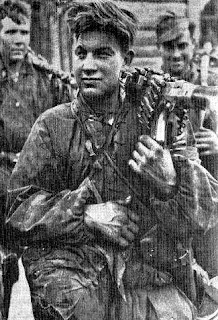 A Waffen-SS soldier shows the fatigue of battle. They earned a fearsome reputation for fighting and cosequently were often the first choice of many young recruits over other other military services. 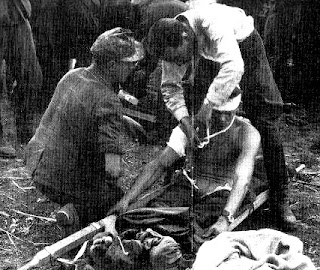 A wounded soldier of the '8th SS Cavalry Division the Florian Geyer' receives help from the Units doctor. The Waffen-SS were feared and loathed in equal measure by the Russians for their fanatical fighting and consequently suffered high casualties. 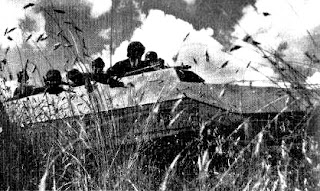 Waffen-SS troops advance cautiously in an armoured vehicle. Soviet troops had learnt from the opening months of the campaign when they had often been caught and destroyed out in the open. Consequently they became experts at using the terrain to ambush German patrols. 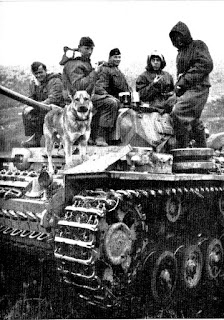 A German Panzer III Tank crew rests and watch the Units mascot, a German Alsation dog. German officers were allowed to keep dogs which were not meant to be pets but working dogs designed to boost morale.

Reconnaissance attached to the Waffen-SS played a vital part in the German advance and later the retreat from Russia, pinpointing enemy positions and searching for cover. Reconnaissance units were responsible for scouting ahead as SS Divisions were often in the vanguard of the fighting in Russia. The soldier on top, is using a scissors peeriscope.


Axis Invasions and the Fall of France

n the spring of 1940, an emboldened Germany asserted itself as a modern conqueror of nations, successfully invading and occupying six countries in fewer than 100 days. On April 9, 1940, Germany invaded Denmark, which capitulated in a mere six hours. At the same time, Nazi warships and troops were entering Norwegian waters, attacking ships, landing troops, and starting a conflict that would last for two months. On May 10, more than 2 million German troops on land and in the air invaded France, Belgium, Luxembourg, and the Netherlands using blitzkrieg tactics. The smaller countries fell within weeks, but France held on until June 22, when it signed an armistice with Germany. Also during this period, the Soviet Union initiated staged elections in Estonia, Latvia, and Lithuania, forcefully annexing them. By the end of the summer, German forces were digging in, building up, and planning for the Battle of Britain.

----
German armored tank crosses the Aisne River in France, on June 21, 1940, one day before the surrender of France.

Waves of German paratroopers land on snow-covered rock ledges in the Norwegian port and city of Narvik, during the German invasion of the Scandinavian country.