Barbarossa The Waffen SS on the Eastern Front Part 5 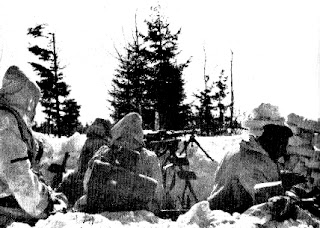 Waffen-SS troops with an MG34 heavy machine gun. The legs could be extended to allow to be used as an anti-aircraft gun or lowered so it could be used as an infantry support weapon. 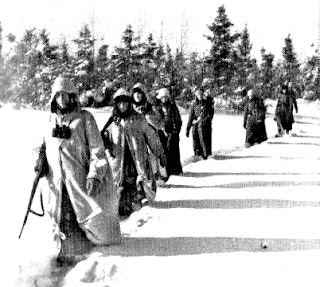 An SS Calvary Division patrol during the winter of 1941. The deep snow slowed the German advance in November and plyed a key role in the halting the German offensive in December. 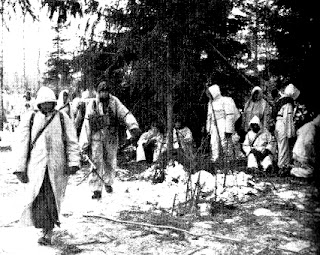 White winter overcoats were issued to advancing troops but underneath many still had summer clothing. As a result frostbites took a terrible toll and many troops lost limbs or were deemed unfit to fight. 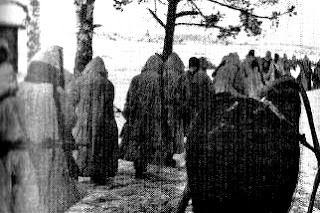 Troops are relieved at the front line. German soldiers were given three weeks leave but due to problems with transport and the great distances involved in getting to Germany often only spent a week with their families. 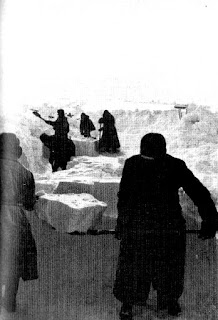 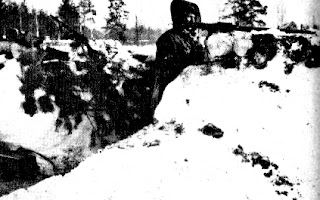 The 4th 'SS Polizei Division' advanced on Leningrad. The siege of Leningrad started on the 8th September 1941 and was not lifted  until 27th January 1944. At372 days long it was one of the longest and most costly sieges in history 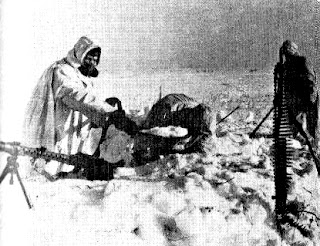 'Das Reich' part of Army Group Centre reached the gates of Moscow in December 1941 but the weather, massive losses and a Soviet counter-offensive forced the division back. 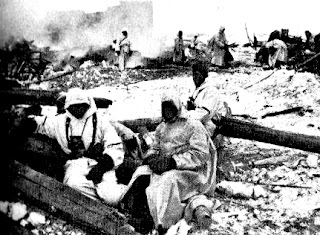 Soldiers from 'Das Reich' Division rest on the outskirts of Moscow, December 1941. The division was decimated by the Soviets counter offensive and withdrawn for rest and refitting. 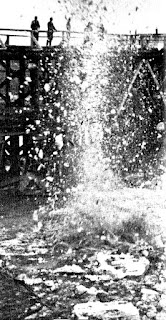 The Waffen-SS use high explosives and mines to blow up dams of the ice blocking a river. The Germans used also mines against the Soviet T34 tank. With thick sloping amour the Germans found the Russian tank a formidable opponent. 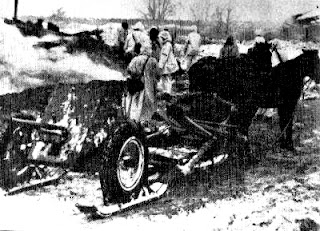 A 3.7 cm anti tank gun is towed along on runners by horses. The gun while an effective infantry support weapon proved ineffective against Russian tanks like the T34 and KV1 and 2, 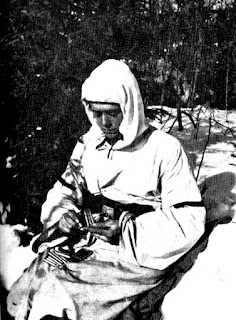 A German soldier loads a magazine for his K98 rifle. Although comparable to Soviet weapons at the beginning of the campaign, its slow rate of fire became a handicap when the Russians began to be equipped with semi automatic weapons. 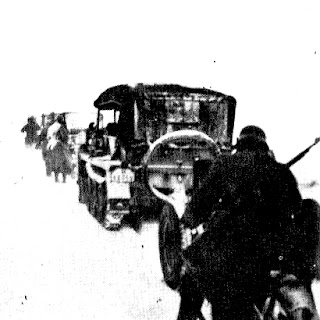 A German convoy makes slow progress through a snow storm. The Russian weather demoralised the German troops as did their distance from home. Nearly a thousand miles seperated Moscow from Berlin. 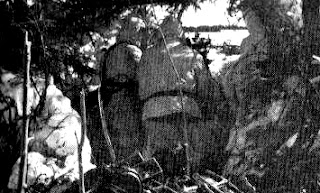 German troops take cover in a copse and scan the horizon.. In the depths of winter woods not only provided cover from the enemy but also as importantly from the elements. 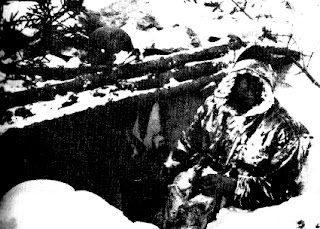 A Waffen-SS soldier emerges from his dug out. Over 100,000 troops suffered from frostbite, the more serious cases requirng amputation. 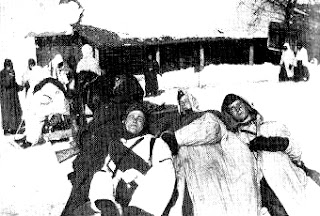 Waffen-SS troops colaapse exhausted after fierce fighting. As well as the winter and hunger took their toll on the German fighting. 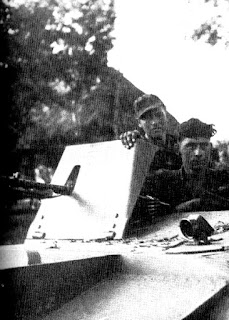 German troops pose behind the machine gun field on a Selkfr-351 halftrack (Actually this a Stug III,sic), As well as transporting troops they were used to tow anti tank and field artillery guns. 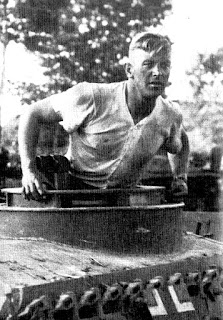 A Waffen-SS tank crew emerges from a Panzer. The Panzer (Stug IIi,sic) was the German tank most used in the opening stages of Operation Barbarossa, but it was outclassed in every respect by the Soviet T34. 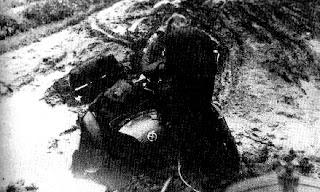 An abandoned Wiking motorcylcle and side-car. The spring and autumn rains in Ryssia were known as the 'mud season' and they claimed many valuable vehicles serverely hampering the German war effort. 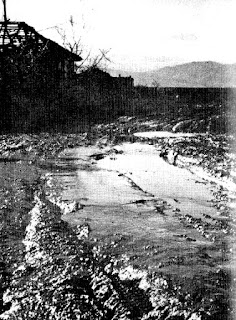 Army Group South with SS-Leibstandarte and Wiking Division marched through the Ukraine and towards the valuable Caucasus oilfields. There they run into fierce resistance but made better progress after being reinforced by Army Group Centre. Despite this the rains made progress difficult. 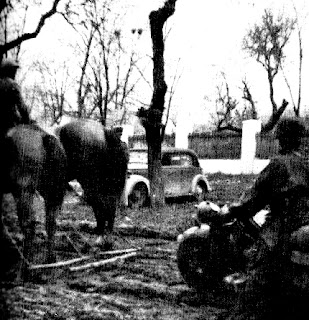 In Operation Barbarossa horses proved to be much more reliable than the mechanised might of the Waffen-SS. The German Army had over 750,000 horses at the start of the campaign in contrast to only about 600,000 motor vehicles, including some 3,500 armoured fighting vehicles. 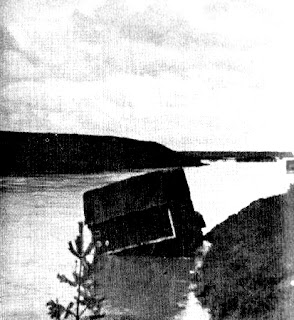 A lorry abandoned to the floods in the Demjansk pocket, early 1942. The trapped troops were provided with 266 tonnes of supplies from the air each day by the Luftwaffe. 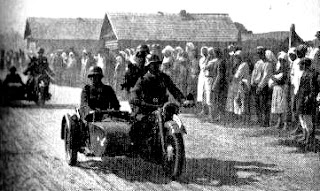 Russian peasants watch as a German motorcycle and side car rushes past towards the front. As Untermenschen or sub-humans the Germans treated them with contempt which simply stiffened their resolve to fight. 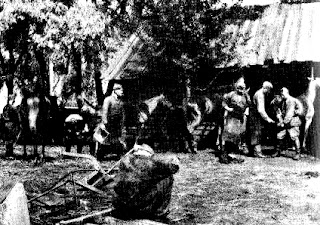 Blacksmiths shoe a horse. At the start of the war the Germans only had one cavalry division but due to the nature of the fighting on the Russian front they finished the war with seven, all mostly in the Waffen-SS. 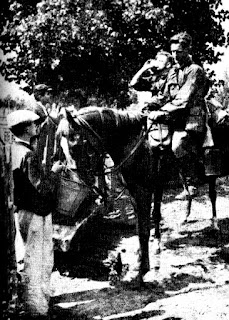 To feed three horses doing useful work such as pulling guns and equipment required the services of two more horses to haul weekly  rations of feed and fodder. 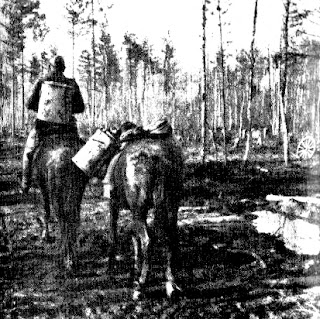 The Germans made extensive use of horses throughout the war, here carring food in Thermos Containers. During Barbarossa they lost about 2.7 million animals nearly double the 1.4 million that were lost in World War One. 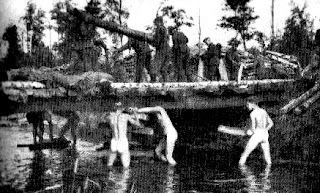 Waffen-SS engineers build a bridge while others bathe naked in the river. Engineers were attached to every unit and were a vital part of the German war effort, helping to overcame whatever obstacles were placed in the way of the advancing army.
Posted by Dachau KZ at 9:28 PM