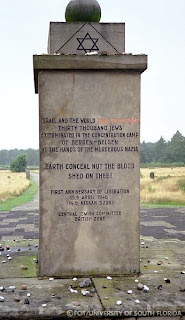 The  crime that is often referred to as the "Gardelegen massacre" occurred on April 13, 1945, on the Isenschnibbe estate near the northern German town of Gardelegen. German SS and Luftwaffe troops forced 1,016 slave labourers who were part of a transport evacuated from the Mittelbau-Dora labour camp into a large barn which was then lit on fire. Most of the prisoners were burned alive; some were shot trying to escape. The crime was discovered two days later by F Company, 2nd Battalion, 405th Regiment, U.S. 102nd Infantry Division when the U.S. Army occupied the area.
It is not clear if a brief and slightly confused summary, the story of an escaped inmate by the name of Antoniak was written before the American soldiers reached the site of the massacre or whether they found him, one of the few survivors, after witnessing the consequences of the deed itself. Nonetheless, when they continued their patrol, they climbed a small hill not far from the town. From there, they spied, some distance away, a burnt brick structure, which as still smoking. When they approached the building, a nightmarish sight met their eyes. Hundreds of charred corpses, dressed in the remnants of prison camp uniforms, were lying in several trenches that had been dug hastily alongside the building. The doors of the building, which was revealed to be a large barn, were also charred, and from beneath the doors were protruding the heads or hands of murdered prisoners. When the soldiers opened the doors, they discovered hundreds of horribly distorted charred corpses inside, all glued together. It was the most harrowing experience those men underwent throughout the war. One of them wrote to his mother several days later about the event.
'Dear Mother,
Yesterday I saw something I'll never forget. It was one of those war crimes that the Germans are noted for. This time the Americans came up to fast and they weren't able to cover up their crime. It took place in a large barn in the town of Gerdelegen. It started out that the Germans were bringing some two thousand Russian prisoners of war from East Prussia on a march to Hannover. While marching to their destination, about one thousand Russians weren't able to continue the march on account of the light meals they were getting. By that I mean two potatoes for each meal. As they dropped out, they were killed where they fell. The balance were taken to Hannover, but the Americans were already east of Hannover, and put about five hundred of these prisoners of war in a large barn in which the floor had a light layer of straw and potatoes soaked with gasoline.
They closed the doors and put the place on fire and BURNED THEM ALIVE. The balance of them were told to dig trenches around the barn and when they got through digging, they were lined up along the trenches and shot and buried. Some were buried alive.
The Americans moved up so fast that they weren't able to get rid of the evidence. Only two men escaped and that is how the story was told.
I was up to see the mass[sic] and words can't explain how bad it was. I took a few pictures of the place and bodies. Now I wonder how many American boys met the same death.
It would be a good idea if you told some of the people about it so that they will know just rotten these Germans are. Even a dead German isn't good because he stinks.
I guess this story must already be in the newspapers back home. It's the real dope and much worse than I can explain in a letter. I don't think the Japs are half as bad.
I hope you didn't get sick reading this. I just thought I'd let you know what's going on
Love...'
The details and facts reported by the young soldier are not necessarily exact, but every line in his letter reflects his deep emotional shock and his burning rage at the murderess and the entire German people. In the first hours and days after the discovery of the barn and the adjacent pits with hundreds of charred corpses of prisoners, it was impossible to clarify the details and answer the grim questions underlying the bloody massacre: who had they been, these individuals slaughtered so cruelly several hours before the Americans arrived? What were the circumstances that led to this deed and, of course, who were the murderess and what were their motives?
[The discovery of the massacre seems to have been by chance. The consensus account is that American Lieutenant Emerson Hunt, a liaison officer between Ozark HQ and the 701st Tank Battalion, was captured by German forces on April 14, 1945, that he bluffed the German forces defending the town of Gardelegen into believing that American tanks were approaching the city, and that this induced the German commander to surrender to the American forces. The Americans arrived at the site before the Germans had time to bury all of the bodies.sic]

The man who gave the order to burn the prisoners, Gerhard Thiele, escaped by disguising himself in the uniform of a German soldier and travelling with false papers. He lived in the Western zone of occupation and later in West Germany under a false name. He was never brought to justice and died June 30, 1994. SS-Untersturmführer(2nd Lieutenant) Erhard Brauny, the transport leader for the prisoners evacuated from the Mittelbau-Dora concentration camp who subsequently wound up in Gardelegen, was put on trial in 1947 before a US military tribunal and was sentenced to life in prison. He died in 1950.[sic]


After some time another wagon arrived with 15 prisoners. They too did not want to climb down and pleaded with the soldiers to spare them. They were dragged off the wagon and murdered in the same fashion as the previous group. When the nine slave labourers finished burying victims they returned to the village. On the way they met a local farmer driving a wagon carrying another six to seven prisoners. He had found them hiding in his barn and immediately informed the soldiers, tow of them came and took them.  The nine Poles were taken back to the forest and witnessed the murder of these prisoners, who were shot in the back of the head. Then they covered the corpses with soil and returned to the village. On the way they they saw yet another wagon with six prisoners, but this time they succeeded in keeping their distance from the soldiers. The Poles feared that if they were again forced to bury victims, their luck would no longer hold and they, in their turn, would be killed in order to cover the traces of the crime. On their way back to their employer's farms, Kostrzewa and his friend witnessed another murder, this time of two prisoner caught in the village street and shot on the spot by the soldiers. Not only foreign labourers but local farmers as well were summoned to bury the dead. In several cases, corpses of the murdered prisoners were heaped onto wagons and transported to the burial trenches in the local forest.
Word of the massacre at Estedt reached the Americans on April 19, when they interrogated captured German soldiers. The following details appeared in the report of the interrogation:
'POW's consistently denied any connection with either of the foregoing, but admitted having seen the bodies of two political prisoners (identified by the striped clothing) in the woods by Estedt... 6 km, of Gardelegen. his information was transmitted through the channels to Div CIC, who visited the area with PW Nachtigall on19 April 1945,and and there found the bodies and graves of a large number of prisoners who had been killed by shooting or having their skulls cracked. CIC questioned the Bürgermeister of Estedt as well as a number of other local people and French and Polish liberated prisoners, and found that knowledge of the affair was quite widespread. Among other facts ascertained was that a 3rd Co of an unidentified Para Unit from Gardelegen had furnished escort guards for the prisoners killed at Estedt and the man directing the affair was Helmut Hockhau.' The interrogator, Lieutenant Kenneth Russ, conducted a thorough inspection of the mass graves of prisoners murdered at Estedt on May 9, 1945. He discovered two pits to the west of the village, identified through the fresh mounds of soil above them. They were located only about 295 yards (270 meters) from farmhouses. hen they began exhuming the graves, the interrogators found it difficult to estimate the number of corpses. It was decided to transfer the victims to the local cemetery  for proper burial. The mayor, Wilhelm Berlin,was ordered to supply the necessary manpower for the task. The graves were exhumed on May 11, with 60 corpses found in the first pit and 30 in the second. A third burial pit was discovered, containing four corpses. Others were discovered in pits dug by the farmers, which were scattered over various sites around the village. In all, 110 corpses of victims of the Estedt massacre were laid to rest in the village cemetery.

EPILOGUE
The graves of these nameless victims are strewn along paths, forests, and villages of Germany and Austria. In the last stage of Nazi genocide, the burial sites of its victims  spilled beyond the traditional territorial borders, such as the  crematoria in Death Camps in Poland, the burial trenches in Lithuania and Byelorussia, and the snow-covered POW camps in the Ukraine, they were dug on the very doorstep of the society that had produced the perpetrators from its midst.
Sources:
Wikipedia
The Death Marches by Daniel Blatman, translated from Hebrew

Signed Affidavit dated 14. August 1947, regarding the trial of Josef Bielmeier, my father in law, by about 15 Dachau inmates on a 'Death March' until they met up with American Forces and returned to Dachau. As ardent Marxist/Communists they had rather seen the Red Army and were disdainful of American opulence.Their signature and KZ numbers attached as follows, 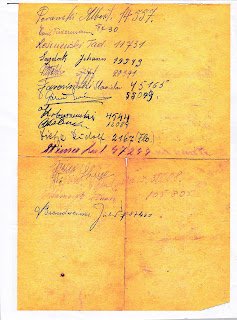 Other sources;
SS-Men:
K.Tobias - Guard
E. Rippelt - Guard
He made extensive motion pictures for his private collection of the Dachau Concentration Camp, and were partly confiscated by American Investigators and never returned. He retained one reel which I have kept.